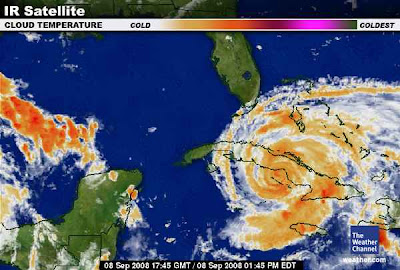 2 pm Update:At 2 pm, Hurricane Ike was back over water, centered 80 miles west of Camaguey, Cuba and 250 miles east southeast of Havana. Ike remains a Category 2 storm with maximum winds of 100 mph. A reconnaissance flight is enroute to measure the strength more directly.

1 pm Update: It appears from satellite and Cuban radar imagery that the center of Hurricane Ike has emerged over the Caribbean Sea off the south coast of Cuba.

Original post:
Hurricane Ike has crossed eastern Cuba and is continuing westward near the southern coast of the island. The storm has weakened somewhat over land, but it is still a Category 2 hurricane with maximum winds estimated from radar and satellite at 100 mph. A reconnaissance flight is scheduled for this afternoon to better determine the current strength.

Ike is moving west at 14 mph from a position 45 miles west southwest of Camaguey, Cuba. The current track will take the storm along or near the southern coast of Cuba and then across the western end of the island and into the Gulf of Mexico, where some restrengthening is likely.

Ike's exact path in the Gulf depends on the interaction between the storm and several upper level circulation features to the north. At this point, a landfall anywhere from Brownsville, Texas to Mobile, Alabama is possible, but the most likely target is the upper Texas coast in the vicinity of Houston/Galveston. Some models are trending further east, however, so western Louisiana is certainly not out of the question.

Ike's passage across Cuba is causing major damage to buildings, agriculture, and infrastructure, especially the electrical grid. Dr. Jeff Masters predicts that Ike will be one of the five most damaging storms in Cuban history. Although it will be approaching from the land side, Ike's path is likely to take it very near Havana on Tuesday.