What's Up With TV Weathercasters?

Oct. 19 Update: The Yale Forum on Climate Change & The Media had a post in July on broadcast meteorologists behaving more responsibly.

Oct. 14 Update: The Great Beyond blog at Nature gives the shorter Paul Hudson:


Oct. 11 Update: The BBC article is now being Telegraphed as:
BBC's surreptitious U-turn on global warming
and
The BBC's amazing U-turn on climate change

Original post:
Given that meteorology is so closely related to climatology, it seems rather odd that weather forecasters, particularly broadcasters, have such a hard time understanding the science of global warming. Here in the Washington DC metro area, one notable exception is Bob Ryan, a former president of the American Meteorological Society, who has spoken out on the air and online about the subject. Other members of the broadcast media are either reluctant to become involved in a perceived controversy or are vehement critics of the science. In the latter category is one local weekend substitute who teamed up several years ago to routinely bash the science with a colleague from Baltimore in a one-hour weekly weather program on a squawk radio station (today's top story: "Marylands Own Steny Hoyer Says Screw You to the People").

Online, of course, one of the most notorious anti-science sites is run by a former broadcast meteorologist.

The latest entry in the science-bashing derby comes from across the pond. In an article today on the BBC web site, What happened to global warming?, Paul Hudson, listed as "Climate correspondent, BBC News", repeats the discredited meme of no warming since 1998. The Beeb is normally a reliable source for science coverage, but among other inaccuracies, this article also parrots the recent misrepresentation of a paper by Latif. Who is Paul Hudson? His Beeb bio lists him as a former UK Met Office forecaster who is now a "presenter", as they say over there, on BBC Look North, which is apparently the BBC local service for Yorkshire and the North Midlands.

Do the harsh lights of the TV studio fry the parts of the brain responsible for processing science? My theory is that these folks just become unable to see the forest for the trees when they spend so much energy focusing on hour-to-hour and day-to-day weather.
Posted by Steve Scolnik at 4:20 PM 3 comments:

BRAMMO, an Oregon company which builds the first mass-market electric motorcycle, was featured on CNBC yesterday morning. Best Buy has invested in the company and is selling the bike in some West Coast stores, with a rollout to the rest of the country to follow. Retail price is $12000, but the machine is eligible for a 10% federal income tax credit for plug-in vehicles; operating costs are about 1¢ per mile for electricity. The state of Oregon also offers a residential electric tax credit of $1500. The Consumer Reports blog was favorably impressed in a June review. 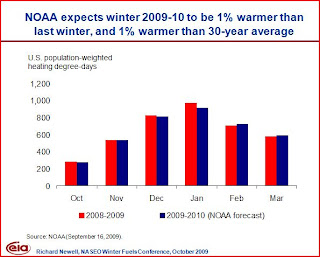 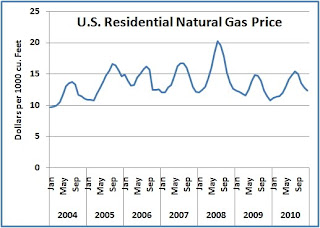 See here for other seasonal forecasts, including the current NOAA winter forecast.

The federal government's Energy Information Agency (EIA) today issued its winter forecast (Oct. 1, 2009 to March 31, 2010). The outlook calls for a national average decrease in home heating expenses of 8% from last year. The decrease is mainly the result of lower fuel prices, but milder temperatures are also a factor. The largest reductions are for households using natural gas (down 12%) and propane (down 14%). Costs for electricity and heating oil are projected to decline by 2%.

NOAA's latest experimental monthly degree day forecast shows that the contiguous 48 states are likely to be 1% warmer than average. Degree day predictions vary between regions, with the Midwest forecast to be 4% warmer and the West 4% colder. New England and the Mid Atlantic regions are forecast to be near normal. The South Atlantic area, which includes DC, Maryland, and Virginia southward through the Carolinas to Florida, is predicted to be 2-3% colder on average. Maryland and Virginia, however, are each expected to be within 1 heating degree day of normal per month.