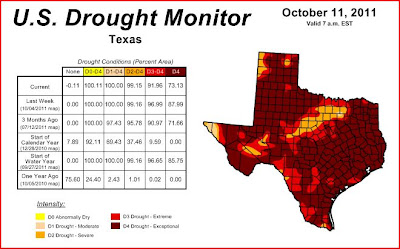 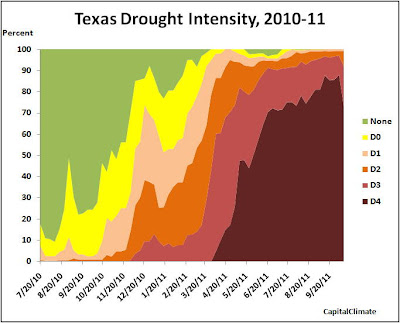 Long-awaited precipitation in the past week has put the first significant dent in the ongoing Texas extreme drought conditions, but 92% of the state remains in the extreme (D3) or exceptional (D4) category. Exceptional drought, the highest category, has dropped from the peak of 88% of the state last week to 73% currently.

Rainfall in the past week as high as 8" in portions of north-central Texas were as much as 6 times the normal amounts, but larger quantities over a more sustained period are needed to continue reducing the extreme drought. Some 24-hour precipitation totals through 9 am CDT, Sunday, October 9, include: The current drought outlook, released October 6, shows drought persisting through the end of the year in most of Texas, with the exception of some improvement in the panhandle region and adjacent areas of Oklahoma. The outlook was published before the heavy rains of the past weekend, however.
Posted by Steve Scolnik at 10:53 AM No comments:

A Canadian company wants to build a $13 billion, 1,700-mile pipeline to carry crude oil from the so-called tar sands region in Alberta through six states and a major aquifer to Texas for refining. Correspondent Tom Bearden reports from Nebraska on the high-stakes environmental and economic battle over the Keystone XL project.

PBS, which seems to be increasingly outsourcing its news gathering operations, presented a comment by one "JASON BERRINGER, Laborers International Union Local 1140", who said:

I worked with TransCanada before on another pipeline. And I have never had a company like them that took care of environmental issues like they have. They really care about the environment.

This would be the same Jason Berringer who was spotted in a paid pro-pipeline ad on a commercial cable news network within an hour or so of the PBS broadcast.

Speaking of outsourcing, there was no mention of the glaring conflict of interest represented by the State Dept. outsourcing the environmental review to a company with close ties to Keystone:

A few days into the demonstrations, the State Department released the final environmental impact statement on the project, a study three years in the making. It says the pipeline would carry a blend of synthetic crude oil and diluted bitumen and poses no significant impact to the environment.

In a classic example of false equivalence, the feckless reporter concludes, "Both sides accuse each other of playing fast and loose with the truth."
Posted by Steve Scolnik at 9:30 PM No comments: