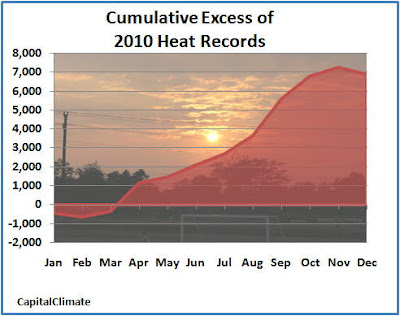 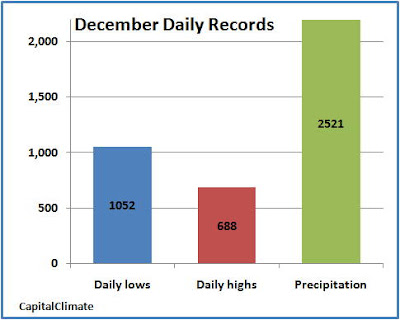 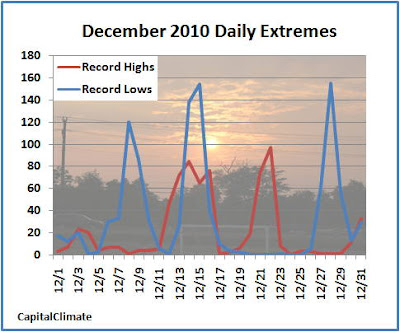 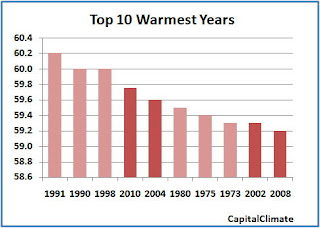 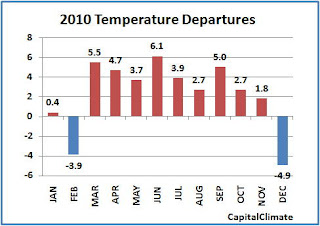 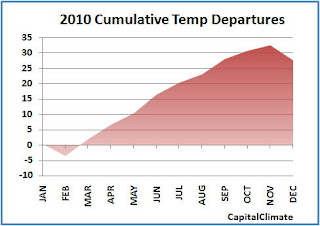 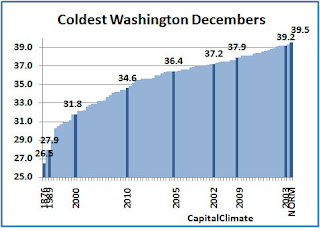 CapitalClimate's analysis of preliminary National Weather Service (NWS) data shows that 2010 was the 4th warmest year on record in Washington, DC. The annual average temperature of 59.8° exceeded the 1971-2000 climatological baseline by 2.3° and was only 0.4° below the record high of 60.2° in 1991. Of the top 10 warmest years in Washington, 4 have occurred in the past decade (darker red shading in the chart). The year 2006 is now in 11th place, so all 5 of the most recent even-numbered years are in the top 11.

December 2010 was the coldest month of the year relative to average. December's departure of -4.9° from the climatological average of 39.5° exceeded February's -3.9°, but those 2 were the only below-average months in 2010. After dipping below average in February, the cumulative temperature departure for the year climbed steadily through the spring, summer, and fall, reaching a peak of 32.6° in November.

The Washington December average temperature of 34.6° was the second consecutive below normal December reading and the coolest since 2000, when the average was nearly 3° lower at 31.8°. There have been 4 other Decembers in the past decade with below-average temperatures: 2002, 2003, 2005, and 2009.

Regionally, the Mid Atlantic states were on the northern edge of a cold area relative to average which extended from the Ohio Valley southeastward through the Carolinas, Georgia, and Florida. Northern New England was near to much above average, and the entire area from Texas northwestward through the western Plains, Rockies, and westward to the Pacific coast was warmer than average. Most of Colorado, Utah, Nevada, Arizona, and New Mexico were much warmer than average.

For the Northern Hemisphere as a whole, there were few other areas of significantly cold temperatures. The most notable region from a news standpoint was the one which extended from the UK eastward across northern Europe and into parts of Siberia. Far northwestern Canada and parts of Alaska were also colder than average.

In the Southern Hemisphere, cold temperatures relative to average were found in western Antarctica, the Pacific coast of South America, and eastern and northern Australia.
Posted by Steve Scolnik at 6:20 PM No comments: