The 2010 hurricane season outlook, released this morning by NOAA's Climate Prediction Center, calls for an 85% chance of above-average tropical activity. This would make the upcoming season the busiest since the record year of 2005, which had 28 named storms. NOAA Administrator Dr. Jane Lubchenco said, "If this outlook holds true, this season could be one of the more active on record." The forecast includes a 70% probability of the following ranges (historical averages in the middle and right columns):


The major factors expected to produce the high level of tropical activity are:
As far as storm landfalls are concerned, NOAA's outlook says that "it is currently not possible to reliably predict the number or intensity of landfalling hurricanes at these extended ranges, or whether a given locality will be impacted by a hurricane this season."

Possible impacts of the hurricane season on oil and natural gas prices were discussed within the past hour on CNBC:

From Reuters:
US govt warns of worst hurricane season since 2005

From Palm Beach Post Eye on the Storm blog, including a video clip of the NOAA announcement:
Another prediction of a “really bad season”
Posted by Steve Scolnik at 11:34 AM No comments: 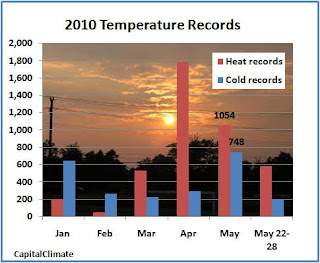 May 27 PM Update: The National Climatic Data Center (NCDC) reports that at total of 88 new daily high temperature records were set on May 26 in the U.S., following 164 on the previous day. A total of only 34 low temperature records were set on the 2 days. For the week ending yesterday, the ratio of heat records to cold records was about 2:1. Although January and February were relatively cold, May is continuing the trend of the last 3 months for the number of heat records to far exceed the number of cold records.

Daily temperature records were also widespread from Pennsylvania through New York and New England and into southern Canada, where an extreme heat alert was issued for the Toronto area. Toronto's high of 31°C broke a record for the second straight day, and records were also set at Peterborough, Ottawa, North Bay and Sudbury. Canadian forecasters are anticipating a warmer than average summer following the warmest winter and warmest spring on record.

Images (click to enlarge): Number of daily high and low temperature records set in the U.S., data from NCDC, background image © Kevin Ambrose; Surface temperature map at 3 pm EDT, May 26, shows 90°+ temperatures across New England, eastern New York, and northward into Canada, from Unisys.
Posted by Steve Scolnik at 12:30 AM No comments: 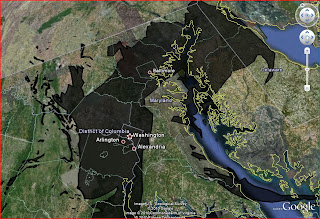 (A tip of the wind vane to CNN.)
Posted by Steve Scolnik at 1:35 PM No comments:


Christian Groups: Biblical Armageddon Must Be Taught Alongside Global Warming

(A tip of the wind vane to Scruffy Dan.)
Posted by Steve Scolnik at 10:18 PM No comments: