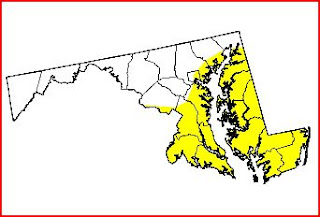 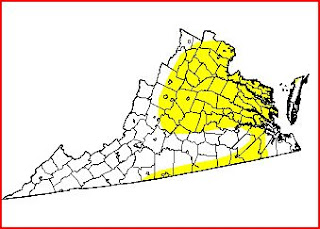 After diminishing earlier in the summer, minimal drought has crept back into much of the Washington-Baltimore region. D0 (Abnormally Dry) conditions have jumped this week from 17% to nearly half of the state of Virginia. In Maryland, the D0 area has increased from 48% to 54% of the state.

Through Aug. 20, monthly rainfall at Washington National is less than 50% of average, and seasonal rainfall since June 1 is a little more than 1" in deficit. As of 5 pm today, monthly/seasonal/yearly totals in the area are: Images (click to enlarge): Maryland and Virginia weekly drought conditions from U.S. Drought Monitor (NOAA/USDA)
Posted by Steve Scolnik at 6:15 PM No comments:

After having reached Category 4 with maximum winds of 135 mph, Hurricane Bill weakened to as low as 120 mph this morning and is now back up to 125 mph. The storm continues on a path which should take it between the East Coast of the U.S. and Bermuda, then close to Nova Scotia and Newfoundland. At 5 pm, the Bermuda Weather Service upgraded its Tropical Storm Watch to a Warning, and a Hurricane Watch is also in effect. High waves and dangerous rip currents are likely to affect Bermuda and much of the U.S. East Coast in the next couple of days.

The storm is moving steadily northwest at 18 mph from a position a little less than 600 miles south of Bermuda. A more northerly turn is expected by Saturday.

Thoughts on Climate Science and Skepticism

As a response to a discussion at the Canadian political blog BigCityLib (BCL), a CapitalClimate visitor left a comment yesterday regarding the state of climate science as depicted in the 20 "Climate Tutorials" links in the left margin of this page. In essence, he said,

I find that the evidence is still underwhelming. . . Primarily, what Im looking for is empirical evidence (which excludes computer models) which links human CO2 with catastrophic warming.

I started to write a comment in reply, but I found that it raises a number of issues about the relationship of science, skepticism, and political policy, so I decided to make a separate post out of it:

Well, thanks for stopping by. I'm sorry you couldn't find what you were looking for. I'm sure the thousands of scientists who have worked for over a century on this problem are even more disappointed. The simple fact is that the science is what it is, whether or not you or anyone else likes it (or more importantly the policy implications). Like any branch of science, there are always some uncertainties involved. Whether those uncertainties are sufficient to preclude policy action is, however, a political question, not a scientific one. Although there are some legitimate scientific concerns, by and large these have been hijacked and used dishonestly for political purposes. (That was behind the original point of the BCL post.)

I have personally paid country club prices to see Lindzen present his position. FWIW, I'm confident he's sincere, but his "iris" hypothesis is just that, a proposal subject to testing. His theory, however, has been widely found by objective observers to be not supported by the evidence (one recent example here).

The Roger Pielkes (there are 2 of them, Jr. and Sr., although some might argue that there are in fact more), have made careers out of self-referential contrarianism. In the case of Jr., this has frequently taken the form of reckless charges of plagiarism, theft, bias, and fraud, all the while cloaking himself in the presumably infallible role of TheHonestBroker™. Their latest effort is meeting with legitimate skepticism on scientific grounds, but that has certainly not deterred the deniosphere from attempting to make political hay out of it.

As a degreed scientist with a minimal knowledge of physics, I find modern particle physics to be too complicated, confusing and counter-intuitive. However, I'm not wasting my time going around to physics forums denouncing the science and its practitioners as commie-pinko-enviro-nazis. Why is it, then, that climate science does provoke such reactions, even among Meteorologists Who Should Know Better? One of the meanings behind the name of this blog is that climate science, through its policy implications, has been inextricably linked to financial and economic issues. Once money comes into the picture, people get very crazy very quickly, and if large amounts of it are involved, even crazier; just look at the recent financial market insanity for proof.

So, the bottom line here is that anyone is entitled to their own opinion, but that doesn't make it science, even if the proponent has the outward trappings of a scientist. Given the economic and political subtext of the discussion, it's not only fair but necessary to ask, "What are the financial and ideological motivations behind what is being said?"

Global warming theory is based on the CO2 greenhouse effect which was discovered over a century ago. I have a more-than-50-year-old atmospheric physics text on my shelf which describes and quantifies it quite well. The development of the computer models the deniosphere so loves to hate (Not Computer Models) has simply added more support to the underlying principles. These and other subsequent analyses have continued to improve confidence in the theory to the point that many scientists involved in the field have called for policy actions to limit the potential negative effects of increased greenhouse gas emissions. They have done this not only individually in some cases, but also through such organizations as scientific societies (including the AMS and AGU), the IPCC, and various national science academies. That has provoked a strong reaction from some who have a vested interest in inaction. A realistic debate about policy choices is one thing, but fraudulent smearing of the science and its practitioners is something else again. The proper response to those tactics is what BCL was discussing. I would call that true skepticism.
Posted by Steve Scolnik at 9:30 PM 3 comments:

The extreme summer heat and drought in Texas continue to set records. Through Aug. 16, this is the hottest summer on record in Austin (records since 1854) and San Antonio (since 1885). The averages exceed the previous records by over 1°. Del Rio is having its third hottest summer since 1906. Austin and Del Rio have also had 14 consecutive days of 100° temperatures through yesterday, and San Antonio had 12 consecutive 100°+ days through the 12th. As of 3 pm CDT today, the temperature is 97° in Austin and 98° in both San Antonio and Del Rio. Here are the details from the National Weather Service:
Posted by Steve Scolnik at 4:29 PM No comments:

11 pm EDT Update: As of 11 pm, Ana was moving across the Leeward Islands with 35 mph winds, Bill had strengthened to just below hurricane force at 70 mph, and Claudette (50 mph) was about to make landfall on the Florida Panhandle from a position about 25 miles west of Panama City.

Original post:
Tropical Storm Ana has continued weakening this afternoon and is now a tropical depression with maximum winds of 35 mph as of 5 pm. Little change in intensity is expected in the next 24 hours, but it could degenerate further into a tropical wave tonight. Tropical Storm Watches are in effect, however, from the Dominican Republic eastward through much of the northeastern Caribbean Islands.

Satellite images show that Tropical Storm Bill has developed an impressive-looking structure, including a central dense overcast, banding, and upper-level outflow. It now has maximum winds of 65 mph. The models continue to forecast strengthening, and one of them has a 38% chance of a 30 kt. increase in wind speed in the next 24 hours. Several of them show Bill becoming a Category 4 hurricane within 5 days.

Tropical Storm Claudette continues approaching a likely landfall on the Florida Panhandle tonight. Winds remain at 50 mph, but some strengthening is still possible. The main threat from this storm is heavy rain, with amounts of 3-6" and isolated maximums of 10" expected. At 4 pm CDT, the storm was centered about 40 miles west-southwest of Apalachicola, Florida moving northwest at 14 mph.

An area of heavy thunderstorm activity in the eastern Gulf of Mexico became Tropical Depression 4 overnight, and it was declared Tropical Storm Claudette at 11:15 CDT based on radar observations. Aircraft reconnaissance subsequently indicated maximum winds have reached 50 mph with higher gusts, and some strengthening is possible before landfall on the northern Gulf Coast of Florida tonight. A Tropical Storm Warning is in effect from the Alabama/Florida border eastward to the Suwanee River in Florida. The storm is centered about 40 miles south of Apalachicola, Florida and is moving northwest at 14 mph.

Meanwhile, Ana has been found to be weakening. Aircraft measurements indicate that the storm is poorly organized, is barely a tropical storm, and could dissipate later today. Maximum winds are 40 mph. As a precaution, a Tropical Storm Watch remains in effect for Puerto Rico, the U.S. and British Virgin Islands, and a number of other islands in the northeastern Caribbean.

Tropical Storm Bill, on the other hand, has strengthened this morning to maximum winds of 60 mph as it moves west-northwest at 16 mph from a position over 1500 miles east of the Lesser Antilles. Favorable environmental conditions in the form of light wind shear and warm water temperatures are expected to contribute to more strengthening, and Bill is forecast to become a hurricane within 24 hours, and a major hurricane in the next several days.