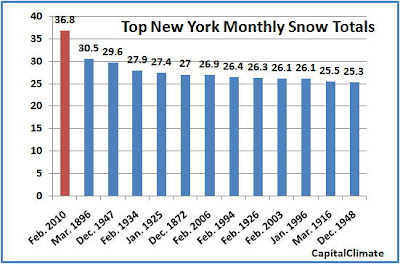 Feb. 27 Update: From the National Weather Service: Evening Update:
Note that the average temperature so far this month has now increased to 26.1° (3.9° below normal). This is over 5° warmer than in 2007, when just over one-third as much snow fell. The largest daily total of 11.4" fell on Feb. 5, a day which averaged above freezing and 5° above normal.

Original post:
The National Weather Service announced within the last hour that Pittsburgh has broken its record for snowiest month ever (measurements began in 1884). The 0.8" of snowfall today from the back edge of the powerful storm pounding the northeast has pushed the total for February to 40.8", just over the previous record of 40.2" in January 1978.

From the NWS:
Posted by Steve Scolnik at 6:00 PM No comments: 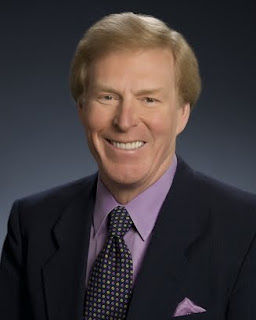 For related posts, see:Feb. 22 AM Update: A remaining snow depth of 1" this morning gives Washington 21 days in February with snow on the ground, breaking the record from 1934. The average snow cover for the month is now 9.8".

Feb. 22 Update: A high temperature of 50° on Sunday led to 2" more of melting, but 2" of snow remains on the ground at 1 am, virtually assuring that the record will be broken 6 hours from now.

Feb. 20 AM Update: Temperatures remained above freezing overnight for the 3rd consecutive day, but snow depth declined only 1" to 6" on day 19 of February snow cover. This puts 2010 into a tie with 1979 for 2nd place. Average snow depth for the month so far is 10.6".

Original post:
With a late January snowstorm and two monster February storms, Washington, DC has now had measurable snow on the ground for 16 out of the first 17 days this month. This morning's measurement showed a remaining depth of 10" after reaching a high of 21" on the 11th.

A CapitalClimate analysis of daily data since measurements began at or near the current National Airport location in 1930 shows that 2010 has now tied with 2003 for the number of days in February with 1" or more on the ground. That puts this year tied for 4th place, behind 1961, 1979, and 1934. Barring an unforeseen meltdown, the 1961 3rd place record of 17 will be tied tomorrow. With temperatures expected to remain in minimal melting territory through the rest of the week, the 80-year record of 20 days in 1934 could be tied on Sunday the 21st.