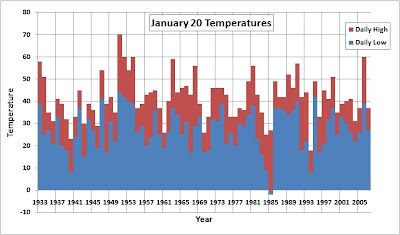 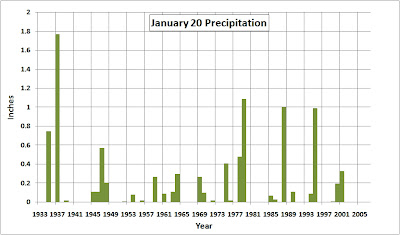 Other references on inauguration weather history:
Posted by Steve Scolnik at 7:00 PM No comments:

A Breath of Fresh Air

ClimateScienceWatch notes that President-Elect Obama has stated in writing, "In an Obama Administration, the principle of scientific integrity will be absolute. I will never sanction any attempt to subvert the work of scientists."

Transition advisers to President-elect Barack Obama have compiled a list of about 200 Bush administration actions and executive orders that could be swiftly undone to reverse White House policies on climate change, stem cell research, reproductive rights and other issues . . .

One potential target for reversal mentioned in the article is the Bush Administration's refusal to grant California a waiver to allow regulation of greenhouse gases from automobiles.

The N.Y. Times has a similar report, Obama Weighs Quick Undoing of Bush Policy.
Posted by Steve Scolnik at 5:05 PM No comments: 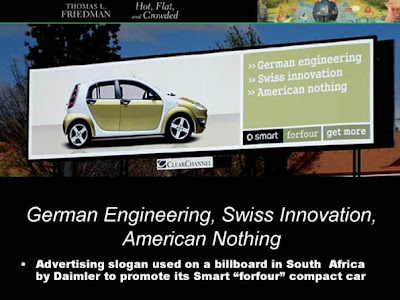 Author Thomas Friedman's recent lecture presented by Politics and Prose in Washington, DC, is available as a streaming webcast. Copies of the PowerPoint slides are included.
Posted by Steve Scolnik at 4:34 PM 1 comment:

After making landfall on the southern coast of Cuba Saturday evening, Hurricane Paloma weakened rapidly, becoming a tropical storm by 7 am today. Late this afternoon, the storm was downgraded to a tropical depression. As of 4 pm, maximum winds are down to 35 mph, and further weakening is expected through tonight.

Tropical Depression Paloma is barely moving toward the north at 1 mph, and a slow northward drift will keep the storm or its remnants near the north coast of Cuba on Monday. Additional rains of 1 to 2 inches are forecast over central and eastern Cuba and the Bahamas.
Posted by Steve Scolnik at 4:34 PM No comments: