A new analysis published yesterday in the journal Geophysical Research Letters of the American Geophysical Union (AGU) predicts that the Arctic could be virtually ice-free as soon as 30 years from now. Previous forecasts had indicated that such an event was likely by the end of the century. The researchers, Muyin Wang of the University of Washington and James E. Overland of the NOAA Pacific Marine Environmental Laboratory, stated

Using the observed 2007/2008 September sea ice extents as a starting point, we predict an expected value for a nearly sea ice free Arctic in September by the year 2037. The first quartile of the distribution for the timing of September sea ice loss will be reached by 2028.

The analysis was done using the 6 IPCC models which were most accurate in simulating currently observed sea ice conditions.

Image (click to enlarge): "The heavy red line is the sea-ice extent observed since the 1950s. Six models that most accurately depict that ice extent are shown with thin colored lines. The heavy blue line is the average of those six models and projects ice-free Septembers in 20 to 30 years. In contrast, the heavy yellow line is the average sea-ice extent of all 23 models including outliers unable to reproduce current sea-ice conditions." (From Univ. of Washington/NOAA)
Posted by Steve Scolnik at 12:21 AM No comments:

Having already gone platinum, the WaPo's poster boy for journalistic lack of integrity, George Will, today repeats one of the lies he was already called on from his previous assault on climate science. What is he aiming for now, titanium? Perhaps he's shooting for the Black Card (as in carbon fiber).

This latest mendacity by the Will-Full liar is effectively demolished by the Loom at Discover, so we won't waste time rehashing the details. However, for those who are not privileged to have the carbon-based publication soiling their doorstep daily, you might be interested in a little rundown of who's paying the bills on the sinking WaPo ship. Besides the full page Cato rant on Monday, here's what was supporting Will's juvenile scribblings on today's page A21: The only other full-page ads in the A section are from Shoppers grocery and Macy's.

ClimateProgress says, "The Washington Post, abandoning any journalistic standards, lets George Will publish a third time global warming lies debunked on its own pages." If you want an explanation, just follow the money, as Woodward and Bernstein did when they were committing acts of real journalism. 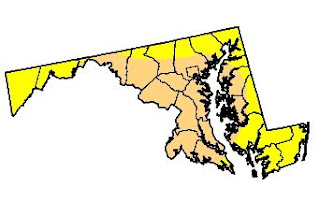 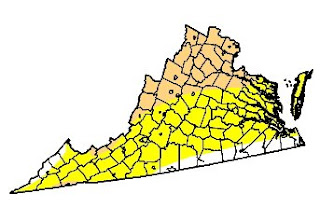 With the 0.18" of rain which started off April yesterday, the year-to-date total of 5.18" at National Airport is only 54% of average. At this point, more than 2.27" of precipitation will need to fall the rest of April in order to avoid breaking the record low February-April total of 4.77" set in 1947. Average precipitation for April is 2.77".
Posted by Steve Scolnik at 3:56 PM No comments:

The RealClimate blog, which has been promoting global warming since 2004, finally admitted today that their so-called "theories" are a gigantic conspiracy:

. . . after listening to the compelling arguments of the distinguished speakers who participated in the Heartland Institute's recent global warming contrarian conference, we have decided that the science is settled — in favor of the contrarians.

Several commenters at the blog declared their relief that they can now relax and devote their full attention to disproving evolution, bioengineering magic Dyson trees, and overturning the tyranny of the law of gravity.
Posted by Steve Scolnik at 4:50 PM No comments:

Frustrated with all the trash strewn around the Web on the subject of climate change? Through the support of Google Custom Search, CapitalClimate now provides a feature which will search CapitalClimate and any of the sites linked from it. The search box is located in the upper left corner of the page. Try it out here:

The Daily Show reviews the Main Stream Media's coverage of the Fargo flooding:


Disclaimer: The Climate Capitalist unfortunately still owns stock in Time Warner, parent company of CNN.
Posted by Steve Scolnik at 10:08 AM No comments:

With All Due Respect

As RealClimate reported last week with all due respect, the Cato Institute was soliciting signatures for an ad bashing President Obama's climate change position. Recipients of the WaPo's carbon-based product found on their doorsteps this morning that the ad constituted one third of the newspaper's incredibly shrinking business section.

A scan of the list of names reveals many of the usual cranks. The wily wabbit has noted at least one bogus credential. Also notable is the scarcity of signers actively involved in meteorology or climatology. Those who can be identified as meteorologists are a motley crew, indeed, and are apparently well outnumbered by the petroleum and chemical engineers: DotEarth has a post on the subject here.
Posted by Steve Scolnik at 4:13 PM No comments: