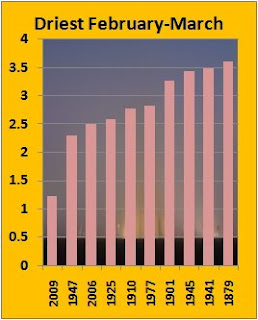 It seems to me that we could easily solve this whole problem just by using Al Gore to block out the sun.

Posted by Steve Scolnik at 11:00 AM No comments:

Your Bonus Cancelled? No Problem
Get Bailout Cash for Home Energy Efficiency Improvements

See also: Disclaimer: The Climate Capitalist owns stock in General Electric, parent of CNBC
Posted by Steve Scolnik at 8:00 AM No comments:

Original post:
Temperatures reaching the low 70s as far north as southern Wisconsin and southwestern Michigan set or tied long-term daily maximum temperature records for March 17 across several Midwest states. The Downtown Kansas City Airport tied the record of 82° set in 1894. Other record readings in Missouri were reported at Joplin, St. Joseph, Columbia, and the Kansas City International Airport. Stations in Iowa, Illinois, Nebraska, and Wisconsin also contributed to the total of 11 record reports. Including cooperative reporting stations, 53 daily temperature records were tied or set across the entire U.S.