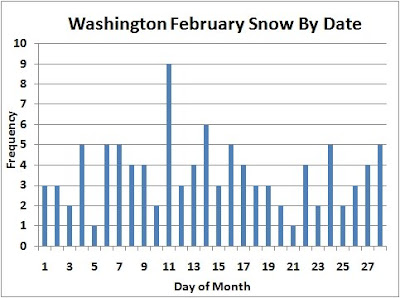 Clearly, by late February the average temperature trend has begun to turn upward, but what is the effect on snow chances? The chart shows the frequency of 1" or more of snow falling on any given date in February over the last nearly 80 years (1930-2007) in Washington. The peak of 9 occurrences occurs near the middle of the month on the 11th, but the preceding and following days have frequencies of 2 and 3, respectively. On the other hand, by the end of the month, snow has been observed 5 times on the 28th, which is 5 times as often as the mere 1.4" which fell on Feb. 21, 1993.
Posted by Steve Scolnik at 5:14 PM No comments:

In an opinion piece by George Will published on February 15, 2009 in the Washington Post, George Will states "According to the University of Illinois' Arctic Climate Research Center, global sea ice levels now equal those of 1979."

It is disturbing that the Washington Post would publish such information without first checking the facts.

Island of Doubt: The Intersection: George Will is Not Entitled to His Own Facts

Denialism: More links are at The Way Things Break: Waiting for WaPo

So, rid yourself of those high-mileage cars and buy a Hummer or two. Seek opportunities to drive your car needlessly. Ensure that your food is produced at least 2,000 miles away, and bottled water should travel at least 3,000 miles. Keep your house shirt-sleeve warm in the winter and chilly in the summer. Better yet, open the windows. Never again buy any used item. Get rid of those energy-saving but funny-looking light bulbs. Write to your electricity supplier and demand that it power your refrigerator with energy from coal. Promote deforestation.

Ignore news stories such as "Scientists: Pace of Climate Change Exceeds Estimates," also in The Post on Feb. 15. God bless Mr. Will for unshackling me from carbon worry.

The seasonal forecast for meteorological spring (March-April-May) 2009 was issued today by the NOAA/NWS Climate Prediction Center. Equal chances of above, near, or below average temperatures are expected across most of the country. The exceptions are the Southwest through the western Gulf Coast, where chances of warmer than average temperatures are up to 50%, and the Pacific Northwest, where cooler than average readings are forecast. States with primarily warm temperatures predicted are: Utah, Colorado, Arizona, New Mexico, Texas, and Oklahoma. Cool temperatures are predicted for the state of Washington, most of Oregon, and northern Idaho.

Precipitation is also expected to be near average over a large area, with drier conditions predicted from the Southwest through the Gulf Coast and Southeast.

Meanwhile, with 10 days left in winter, temperatures for the last 90 days have been running warmer than average over most of the Southeast and nearly all of the western half of the U.S. Cooler than average temperatures have prevailed over New England, the Mid Atlantic, and the Midwest, as well as central and southern Florida and the extreme Pacific Northwest.
Posted by Steve Scolnik at 1:51 PM No comments:

So is Gray just another sad example of the distinguished elderly scientist going off the rails and becoming a crank? I think so, but given his career and accomplishments, he deserves at least the respect of a refutation.

Original post:
Recent climate change reports have actually underestimated the problem, according to a briefing Saturday at the American Association for the Advancement of Science (AAAS) Annual Meeting in Chicago. Christopher Field, a Stanford researcher, reported that greenhouse gas emissions from 2000 to 2007 have been underestimated. Field also noted the effect of positive feedback loops:

There is a real risk that human-caused climate change will accelerate the release of carbon dioxide from forest and tundra ecosystems, which have been storing a lot of carbon for thousands of years.

From the press:
Posted by Steve Scolnik at 4:52 PM No comments: