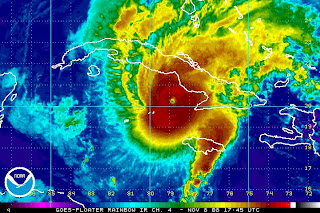 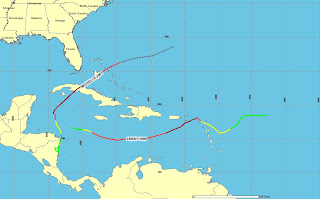 7 pm Update: Major Hurricane Paloma made landfall near Santa Cruz del Sur, Cuba, around 6:20 pm as a strong Category 3 storm with maximum winds of 125 mph. Winds have now decreased to 120 mph, and further weakening is expected over the next couple of days.

4 pm Update: As of 4 pm, maximum winds have increased to 145 mph, making Paloma the second strongest Atlantic hurricane in November. Little decrease in strength is expected before landfall.

Major Hurricane Paloma has intensified to Category 4, with maximum winds of 140 mph. Paloma is now tied for the second strongest November hurricane in the Atlantic basin. The strongest was Hurricane Lenny of 1999, which reached maximum sustained winds of 155 mph. Hurricane Michelle, which followed a very similar track in 2001, also had peak winds of 140 mph in November, although that storm formed in the last few days of October. Also tied for second place is Hurricane Greta of 1956.

Jeff Masters notes in his blog that this is the first time in history that major hurricanes have occurred in 5 separate months of the same season: Bertha (July), Gustav (August), Ike (September), Omar (October), Paloma (November). The only other season with as many as 4 was the notorious 2005 of Katrina and friends.

Some weakening is likely in the short term, but Paloma is expected to make landfall on the southern coast of central Cuba as a major hurricane. Hurricane Warnings continue in effect for the southern and northern coasts of central Cuba. After making landfall tonight and crossing Cuba, the storm is forecast to weaken and stall south of the Bahamas.

At 1 pm, Paloma was centered about 65 miles southwest of Santa Cruz del Sur, Cuba, moving east northeast at 9 mph. This track is expected to continue through Sunday with some decrease in forward speed after landfall.

Aircraft reconnaissance reports indicate that Hurricane Paloma has now become a major Category 3 storm with maximum winds of 115 mph. The storm continues to move north northeast from a position about 30 miles south of the eastern end of Grand Cayman Island. Hurricane Warnings remain in effect for the Cayman Islands and several provinces of central Cuba. Landfall is likely on the central Cuban coast late Saturday.
Posted by Steve Scolnik at 6:52 PM No comments:

After reaching hurricane strength Thursday evening, Hurricane Paloma has continued intensifying today. The storm is now at Category 2, with maximum sustained winds of 105 mph. Hurricane Warnings are in effect for the Cayman Islands and the Cuban provinces of Sancti Spiritus, Ciego de Avila, Camaguey, and Las Tunas. A Tropical Storm Warning is in effect for Granma province.

Paloma is centered about 40 miles south of Grand Cayman, moving north northeast at 6 mph. The track is forecast to turn more toward the northeast tonight.

Further strengthening is likely, with the storm possibly becoming major (Category 3) before landfall on the southern coast of central Cuba.
Posted by Steve Scolnik at 3:57 PM No comments: 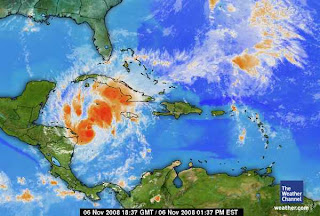 4 pm Update: The Hurricane Watch has been upgraded to a Hurricane Warning for the Cayman Islands. Maximum winds are now 65 mph.

Aircraft reconnaissance has determined that Tropical Storm Paloma, which developed from Tropical Depression 17, has strengthened. Maximum winds are now 60 mph. At 1 pm, Paloma was centered a little over 100 miles northeast of the border between Honduras and Nicaragua. Movement is to the north at 7 mph, and a turn more to the northeast is expected by late tomorrow. 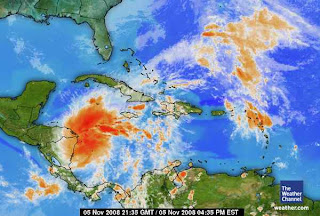 In a reminder that the official hurricane season lasts through November, a stormy area in the southwestern Caribbean has organized this afternoon into Tropical Depression 17. Atmospheric and oceanic conditions are favorable for development, and the depression is expected to become a tropical storm and possibly a hurricane in the next couple of days. Two major models are forecasting the storm to reach major hurricane strength before crossing Cuba.

Maximum winds are now about 30 mph as the depression moves northwest at 5 mph. Heavy rains are predicted for eastern Honduras and northeastern Nicaragua as the storm moves near the coast, then turns more northerly and eventually northeasterly toward eastern Cuba.

The WaPo's lead article on Halloween, A Last Push To Deregulate, reported that BushCo is racing the calendar to undermine as many government regulations as possible, including those applying to the environment. Apparently not content simply to refuse to do their job under court order,

The White House is working to enact a wide array of federal regulations, many of which would weaken government rules aimed at protecting consumers and the environment, before President Bush leaves office in January.

One environmental rule, apparently opposed even within the ineffectual EPA,

would allow current emissions at a power plant to match the highest levels produced by that plant, overturning a rule that more strictly limits such emission increases. According to the EPA's estimate, it would allow millions of tons of additional carbon dioxide into the atmosphere annually, worsening global warming.

This story was picked up today by Reuters (via AOL News): Bush Team Rushes Environmental Rules. Other comments are provided by:
Posted by Steve Scolnik at 4:24 PM No comments: