Feb. 28 Update: Other than a few flurries, snow failed to materialize in San Francisco. The National Weather Service reports:

As it turns out, a few showers did linger during the early morning hours of February 26th to allow for snow all the way down to sea level. However, only trace snowfall was reported around San Francisco. Therefore the last measurable snowfall in San Francisco still remains 1976. Farther south toward Monterey, light snowfall dustings were also reported. Higher peaks above approximately 2000 feet received more measurable snowfall with a few inches, which is not unusual for this time of year. The overall airmass remained rather unstable during the afternoon of February 26th which resulted in convective rain and snow showers across the region. Several weather spotters reported snow down to sea level once again, but no accumulation was noted.

1:30 PM PST Update: (Headline modified to clarify event is only a possibility.) The latest forecast discussion from the National Weather Service confirms that measurable snow is unlikely below elevations of 500 feet: Note to Ice Agers: The average change in temperature with height is 5.38°F/1,000 Ft, more when the air is especially cold aloft as in the current situation, so snowfall in the hills doesn't count for any records.

Meanwhile, very heavy rainfall rates have been reported this morning from the storm. A downpour in northeastern San Francisco recorded 0.11" of rain in 5 minutes, a rate of over 1" per hour. Over 2" were reported in 24 hours west of Cupertino.

Original post:
A strong upper-level low pressure area is bringing cold temperatures to the San Francisco Bay area and prompting the National Weather Service to issue a winter weather advisory for elevations above 1000 feet in the North Bay area: If measurable snow were to occur at sea level, it would be only the 5th such occurrence in the past century, according to Golden Gate Weather Services. Unofficial reports indicate that there were 7 such events in the second half of the 19th century.

H/T: NCAR AtmosNews
Posted by Steve Scolnik at 1:14 AM No comments: 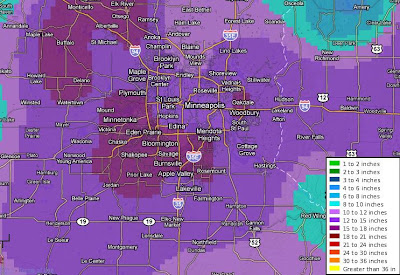 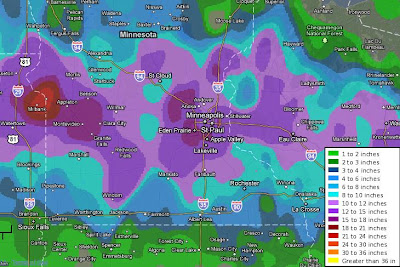 The 13.8" of snow on February 20-21 in Minneapolis was the largest amount for a single storm in February. It was also the first time more than a foot of snow fell in a single February storm. Some nearby locations reported amounts up to 20".

Of the top 5 February storm totals at Minneapolis, 3 have now occurred in the last 7 years. Climate records at Minneapolis have been collected for 140 years (since 1871).

From the National Weather Service: The winter snowfall total of 74.9" to date at Minneapolis is now the 10th highest on record for a full season, but it's the 3rd highest to date. The record seasonal total was 98.6" in 1983-84.

The NWS points out that February on average is the least snowiest winter month in Minneapolis. The reason for this is that the upper Midwest is usually dominated by cold high pressure areas in mid-winter. These tend to be relatively dry, and they suppress the prevailing storm track to the south. Except for a stretch of several days in which temperatures failed to rise out of the single digits, this February has been relatively warm at Minneapolis. Through the first 3 weeks, the month has averaged 1.1° above the long-term climatological mean.

Here are some reports of double-digit snow totals from southern Minnesota and western Wisconsin:
Posted by Steve Scolnik at 6:26 PM No comments: