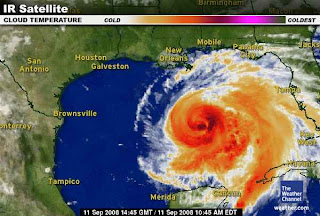 11 am Update:The strength and track of Hurricane Ike remain unchanged at 11 am, but the size of this very large storm has increased even further. Tropical storm winds now extend up to 275 miles from the center. Warnings have been issued for a large portion of the Texas and western Louisiana coasts:
Original post:
Hurricane Ike remains a Category 2 storm with maximum winds of 100 mph as it moves toward the northwestern Gulf of Mexico this morning. Ike has an unusual structure, since the lowest pressure of 946 mb would normally be associated with at least a strong Category 3 storm. The inner core is small, with an eye only 10 miles in diameter, but the area of strong winds is large, especially in the northern half of the storm. Hurricane force winds extend as far as 115 miles from the center, and tropical storm force winds extend up to 255 miles. Ike's expected track will miss some of the warmest water in the Gulf, but it is still forecast to become a major hurricane before landfall.

After moving northwest for a while last night, Hurricane Ike is now moving west northwest at a slightly faster rate, 10 mph. At 8 am, the center was located 575 miles east of Brownsville, Texas. There is still some wavering among the models over the strength of the high pressure ridge to the north of the storm, but landfall on the central Texas coast is predicted for late Friday night or early Saturday morning. Regarding the specific track, the National Hurricane Center continues to caution,

IN THIS CASE IT IS PARTICULARLY IMPORTANT NOT TO FOCUS ON THE EXACT FORECAST TRACK SINCE DAMAGING WINDS EXTEND SO FAR FROM THE CENTER.

Posted by Steve Scolnik at 8:10 AM