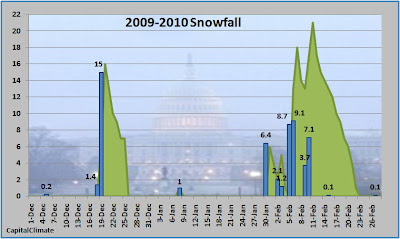 For related posts, see:
The Washington, DC 2009-10 snowfall season kicked off on December 5 with a slushy mess; officially, only 0.2" of frozen precipitation was measured. This was followed 2 weeks later by a record-setting storm on the 18th-19th. The 15" on the 19th broke the December daily record, and the storm total of 16.4" pushed the monthly total to a new December record of 16.6". After peaking at 16", snow depth on the ground declined rapidly in the following week, disappearing by the 26th.

Except for 1" on the 8th, January remained virtually snowless until the 30th, when 6.4" fell. The monthly total was slightly more than 1" above average. 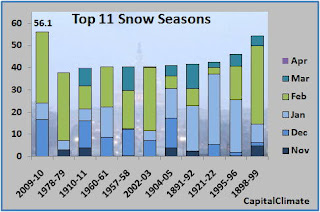 The bulk of the winter's snow total fell in February. The 3.3" on the 2nd-3rd was quickly followed by 17.8" on the 5th-6th. This storm was the 4th largest of all time in Washington and the 2nd biggest at the current National Airport location.

Another 10.8" was reported in the blizzard of Feb. 9-10. The additional snow from this storm set the all-time seasonal snowfall record at all 3 major Washington area reporting locations (Washington National, Dulles, and Baltimore BWI). After peaking at 21" on the 11th, the snow coverage was slow to melt, reaching a trace on the 23rd. The 22 days with measurable snow on the ground set a new modern record for February. Following the epic amounts of the first 10 days of the month, only 0.1" of snow fell on each of the 15th and 27th.

Although March snowfall in Washington is rare, it's far from unprecedented (see "Not the March of the Penguins"). In fact, 7 out of the other 10 biggest snow seasons in Washington had significant measurable snow in March (an 8th one, 2002-03, had 0.1"). So, despite the statistical odds against it, there is still a possibility of extending the record seasonal total. 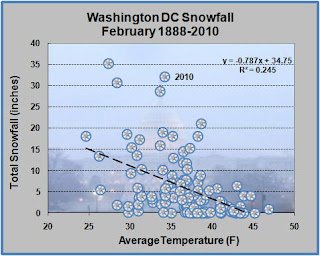 Given the excessive snowfall this winter, it seems like a good time to revisit an analysis from 4 years ago on the relationship between snowfall and temperature. The chart to the right shows the February monthly snowfall plotted vs. the average temperature. When the data for the last 6 years through 2010 are included, the relationship actually weakens: The percentage of variance in the snowfall accounted for by temperature declines from 25.1% to 24.5%.

Notice how far off the trend line the point for 2010 is located. In fact, all 5 of the Februaries with snowfall over 20" are significantly warmer than their snow amounts would indicate. Out of the 140 years of records, February 2010 was as warm as, or warmer than, 36 of them. In other words, over 25% of previous Februaries were equal to or colder than this year's. 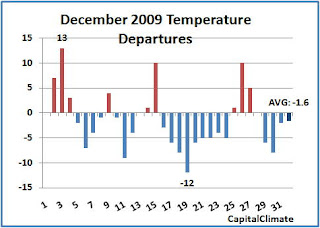 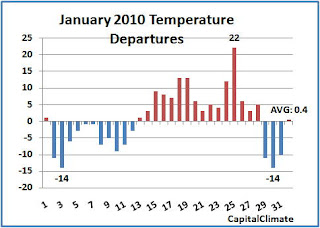 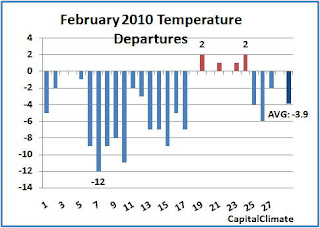 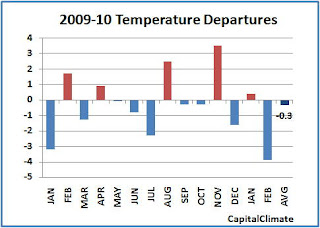 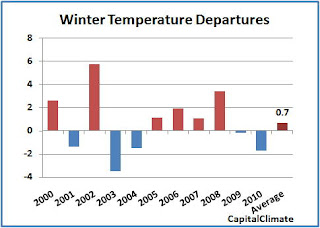