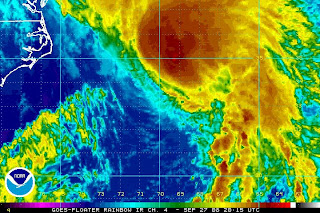 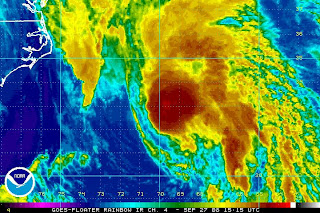 Kyle has been zigzagging between northwest and north; its current track on average is toward the north northwest at 15 mph. A gradual turn to a more northerly direction is expected, which will bring the storm to a landfall near the Maine/New Brunswick border late Sunday. Some additional strengthening is likely, with weakening again before landfall.
Posted by Steve Scolnik at 11:48 AM No comments: 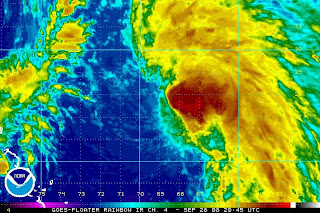 5 pm Update: Aircraft reconnaissance indicates that Tropical Storm Kyle's maximum winds remain at 60 mph, although the storm is somewhat disorganized from the effects of wind shear (upper level westerly winds). The track continues to be to the west northwest, but a gradual turn to the north and north northeast is expected. The forecast path has been shifted a little to the east, increasing the chances of a landfall on the southwestern coast of Nova Scotia.

Some additional strengthening is likely, with Kyle becoming a hurricane by Saturday night. The forecast track continues to take the storm center well to the west of Bermuda, but westerly wind shear is forcing the strongest winds to the east side of the storm. This has prompted a Tropical Storm Warning to be issued for Bermuda.

As the storm continues on its northerly course, it is expected to make landfall late in the weekend somewhere from eastern New England through New Brunswick or Nova Scotia. Hurricane force wind gusts are possible as the storm reaches the Canadian Maritimes.
Posted by Steve Scolnik at 1:02 PM No comments: 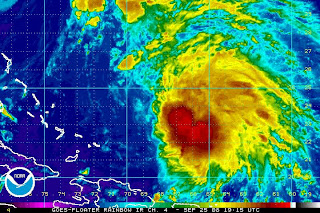 In view of the double crises threatening to destroy both capital and climate, CapitalClimate will be suspending posting until the emergencies are resolved. This action is motivated by the inspiring leadership of Stephen Colbert:

Posted by Steve Scolnik at 3:39 PM No comments: 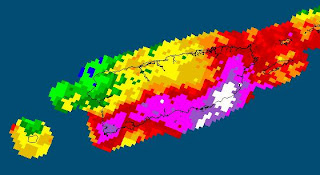 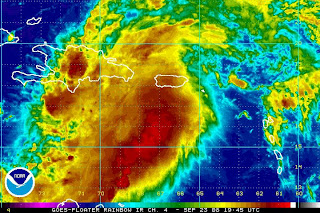 Images: Precipitation total through 8 am this morning from NWS/NOAA, infrared satellite view from SSD/NOAA.
Posted by Steve Scolnik at 4:59 PM No comments: