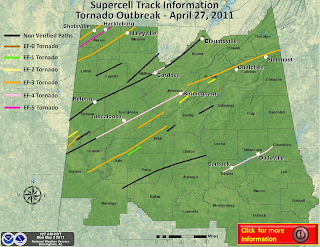 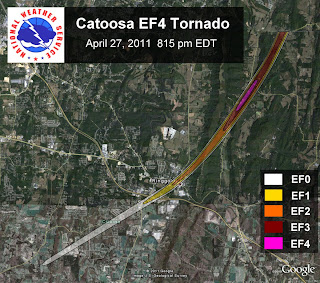 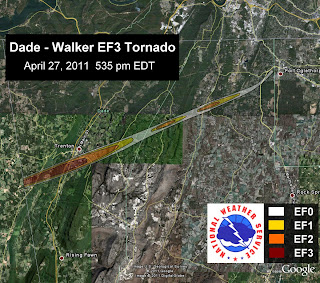 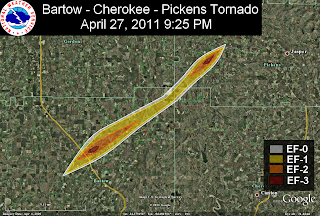 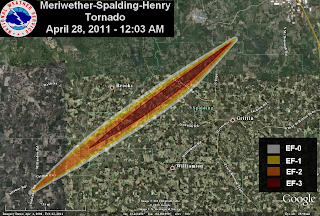 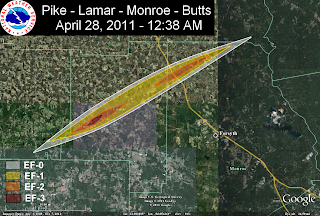 May 2 Update: The National Weather Service has designated the massive Tuscaloosa tornado as a strong EF-4 storm with winds up to 190 mph. The storm caused over 1000 injuries and at least 65 deaths. The path length was a very impressive 80.3 miles, and the damage width was 1.5 miles where it crossed highway I-65. The city of Tuscaloosa still reports 340 missing from the storm.

This storm was one of several strong to violent tornadoes produced by a supercell thunderstorm which began in Newton County, Mississippi at 2:54 pm and dissipated in Macon County, North Carolina around 10:18 pm CDT, covering a total distance of 380 miles in a little under 7.5 hours.

There are at least 2 other EF-4 tornado tracks in the Birmingham NWS office area. (Track map updated.)

May 1 Update: The total number of tornadoes for the April 26-28 event has been revised upward to 312, which is now more than double the previous single-event record. There were an estimated 266 tornadoes in the 24-hour period ending 8 am April 28, which is also a new single-day record.

The Hackleburg, Alabama tornado, previously designated EF-3+, has been confirmed as EF-5, the maximum tornado intensity. Winds were estimated at over 200 mph. The path length was over 25 miles in Marion County, continuing into the Tennessee Valley, with a damage width of 3/4 mile. There were at least 25 deaths from the storm. Several subdivisions, the Hackleburg High School and Wrangler Jeans plant were destroyed. A total of at least 100 structures were destroyed. Motor vehicles were moved 150-200 yards.

A report from the adjoining area serviced by the Huntsville, Alabama NWS office indicates that this tornado continued as an EF-4 into Franklin and Lawrence Counties with a path length of at least 39 miles and 41 fatalities. "Continuous significant devastation" was reported throughout the city of Phil Campbell, including a church completely destroyed with only the slab remaining. Significant devastation also occurred in the areas of Mt. Hope, Langtown, and extreme northwestern Morgan County.

Original post:
As the amazing April 2011 tornado statistics continue to be compiled, the records continue to fall:
Damage surveys are still ongoing, but the NWS has so far confirmed one EF-3 tornado in Alabama, as well as 4 EF-3+. There are also 2 EF-3+ tornadoes with surveys in progress. In Georgia, an EF-4 tornado has been confirmed in Catoosa County. [Update: This is only the 9th EF-4 tornado to have been reported in Georgia since 1950.] There were also 4 EF-3 tornadoes. The paths of those storms were in:
Images (click to enlarge): Preliminary and confirmed storm tracks in Alabama and Georgia from the tornado outbreak of April 27-28, 2011.
Posted by Steve Scolnik at 6:27 PM No comments:

May 1 Update: A second tornado, in Alabama, has now been rated EF-5.

April 30 Update: See here for an update on the tornado records being broken.

Original post:
The National Weather Service announced today that at least one of the tornadoes in the major outbreak of April 27 was given a preliminary rating of EF-5, the first one at the maximum intensity in nearly half a century in Mississippi. Damage assessment of the Tuscaloosa, Alabama storm is still ongoing.
Posted by Steve Scolnik at 5:23 PM No comments: 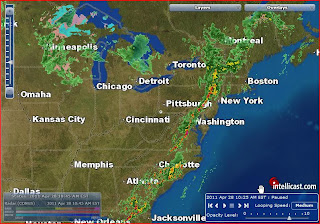 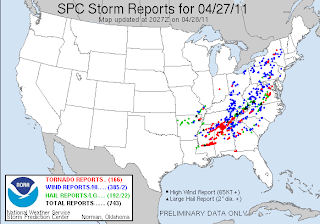 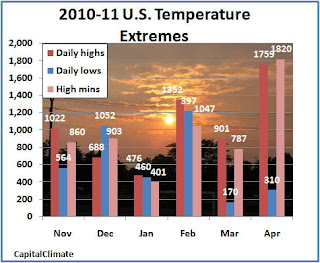 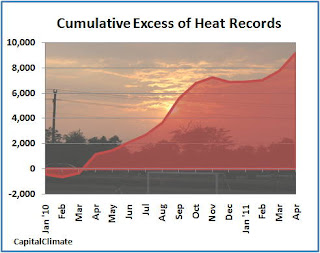 Posted by Steve Scolnik at 2:10 PM No comments: 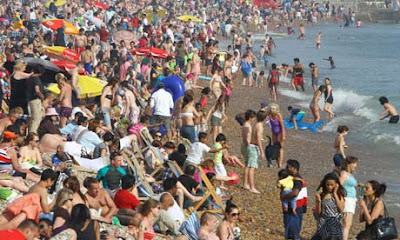 The hottest Easter in at least a century in Britain is keeping this month's temperatures on a pace to break the 2007 record for the warmest April in history. The highest temperature over the weekend was 27.8°C on Saturday at Wisley, in Surrey. In London, the temperature was 27.1°C on Saturday and around 25°C on Sunday, vs. a normal high of 15°C at this time of year.

Over 100,000 people were estimated to have flocked to southern beaches this weekend.

London temperatures this week are forecast to range from a high of 22°C on Monday to a more seasonable 13°C for the Royal Wedding on Friday.

Temperatures in April to date have been well above average over most of Europe, with the highest departures in Spain, France, and Germany.

Images (click to enlarge): Weekend crowds at Brighton beach, England, from UK Guardian; European temperature departures from average for April, 2011 to date, from NOAA/ESRL
Posted by Steve Scolnik at 1:18 AM No comments: 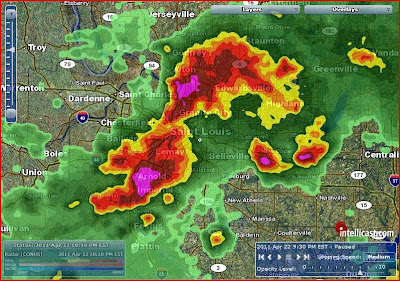 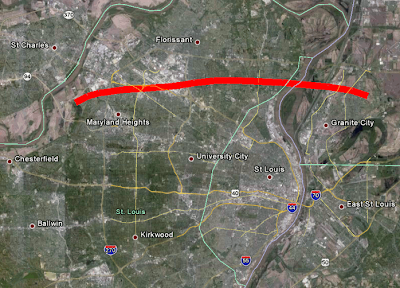 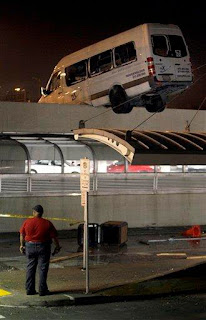 A tornado which caused extensive damage in the northern suburbs of St. Louis on Good Friday evening, April 22, has been rated EF-4 on the enhanced Fujita scale by the National Weather Service (NWS). EF-4 includes winds of 208-260 mph, with gusts as high as 261 mph. The storm was one of 2 tornadoes in the St. Louis metropolitan area. It was the strongest tornado in St. Louis County since January 24th 1967. The NWS reports, "Some of the most intense damage occurred in St. Louis County across Maryland Heights, Bridgeton, St. Ann, Edmundson, Lambert St. Louis International Airport, Berkeley, and Ferguson and in Madison County near Granite City." At the airport,

Many of the large windows in the main terminal building were blown out or damaged by flying debris and a large section of roof was peeled from Concourse C. Although the vast majority of people were evacuated to lower levels and to interior rooms before the tornado hit, 5 people were treated and released from area hospitals for injuries due to flying debris. The airport was closed due to the extensive damage.

Some flights had resumed by Sunday, with full operations expected by midweek.

The lack of deaths from the storm was attributed to the advance warning of at least half an hour and excellent response by the public.

This was the second major tornado outbreak in a metropolitan area in less than a week, following the Raleigh tornado last Saturday, April 16. The Weather Channel reports that there have been 28 tornadoes in St. Louis County since 1950, but there have now been 2 of them since New Year's Eve, both EF-3 or higher.
Posted by Steve Scolnik at 5:20 PM No comments: