The fringes of Superstorm Sandy reached well into the Midwest, as Cleveland reported a peak wind gust of 68 mph at 11:25 pm on October 29. Heavy rainfall also pushed the monthly precipitation to new records at Cleveland and Mansfield, and near-record amounts were observed elsewhere in Ohio and northwestern Pennsylvania. From the National Weather Service:
Posted by Steve Scolnik at 10:00 AM No comments: 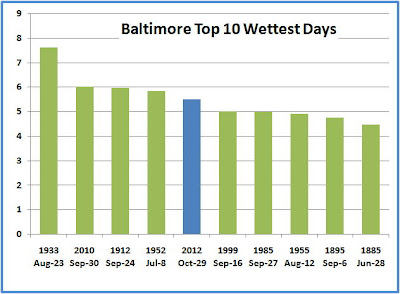 October 30, 7 PM Update: Based on daily records from the National Climatic Data Center, yesterday's rain from Sandy was also the 5th wettest day of any month in Baltimore climate history dating back to 1871. It was the highest precipitation for any day other than in the months of July through September.

October 30, 4 PM Update:
The Washington National daily total of 3.85" is confirmed by the National Weather Service. The amounts at Washington Dulles and Baltimore were all-time daily records for the month of October: Records were also set at Philadelphia, Atlantic City (more than doubling a 104-year-old record), Wilmington, Avoca PA, Pittsburgh, Harrisburg, Rochester, and Buffalo. According to the National Climatic Data Center, the records at Wilmington and Atlantic City were also all-time October daily records. The Washington National amount was an all-time October record at the current location (76 years). The NWS reports: Original post:
The unofficial total rainfall today of 3.85" at Washington not only breaks the record for October 29 (2.69" in 1885) by over 1", but it is also the highest precipitation so late in the season. It's the second highest daily amount for any day in October, and it's the only time over 3" has been observed later in the year than October 25, except for the 3.10" on December 7 last year.
Posted by Steve Scolnik at 1:30 AM 1 comment:

Original post:
The National Weather Service reports that the post-tropical phase of Hurricane Sandy could threaten the modern record for low pressure readings at Washington and Baltimore:
Posted by Steve Scolnik at 1:43 AM 2 comments: 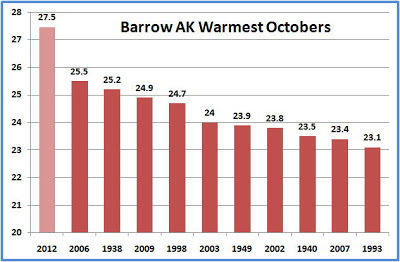 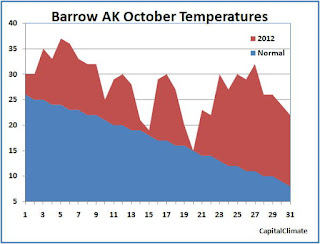 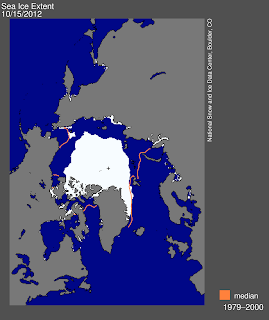 November 11 Update: The warm streak has continued into the first third of November. The monthly average through the 11th is 13.7°, which is 9.0° above normal. Only 2 days so far have been below average (-2° on the 3rd and 5th).

November 1 Update: The preliminary monthly report from the National Weather Service shows the average temperature for October 2012 was above expectations at 27.5°. That is 10.3° above normal and 2.0° above the previous record. [Charts updated.]

The excessively warm temperatures were also reflected in the precipitation total which was 72% above normal.

9 PM Update: As of 2 pm local time, the daily high of 27° and low of 26° yield an average which is 17° above normal. This is now the 6th consecutive day with temperatures of at least 15° above normal.

Original post:
In mid-July, a certain high-traffic weather/climate blog was prematurely touting "Coldest July in history for Anchorage?", and this claim was widely echoed in the climate deniosphere. As noted by Tamino at Open Mind and further discussed in the comments, the Question Mark ? was significant, since the final July average missed the record by over 1°F, putting 2012 in 7th place.

Needless to say, no correction was ever published for this misinformation by the perpetrators, and here's something else you're not likely to see from them: With 4 days left in the month, Barrow, on Alaska's Arctic coast is on track to smash its record for warmest October by an unprecedented margin.

The National Climatic Data Center notes that "Barrow is the most northerly First-Order station operated by the National Weather Service." As such, it has a reliable temperature record extending back nearly a century, to 1920. The first 10 days of October started off as the warmest on record, and the warm streak has continued through the remainder of the month. In fact, the departures from normal have increased even further in the past week, reaching an astonishing 21° yesterday, the 27th. All of the past 5 days have been at least 15° above average. So far, every single day of October has averaged above normal except one which was equal, and the forecast indicates that will continue with double-digit departures through the end of the month.

The monthly average temperature so far of 28.0° is currently 9.6° above average. Despite a cooling trend in the next several days, the forecast temperatures through the 31st indicate a final monthly average of 27.3°, or nearly 13° above the October normal of 14.6°. This would be 1.8° above the previous record in 2006, a margin greater than the difference between the current warmest October and the 7th warmest. Note that 7 of the 10 warmest Octobers at Barrow have occurred in the years beginning in 1998.

The extraordinary late-season warmth at Barrow reflects an area of above-normal air temperatures over the Arctic Ocean from north of Siberia eastward to the Beaufort Sea near Alaska, where temperatures have averaged as much as 14°C above normal. This extremely warm area corresponds closely with the wide area of open ocean remaining from the record-breaking Arctic ice melting season of 2012.

Posted by Steve Scolnik at 6:11 PM No comments: