An article posted yesterday on the UK Guardian web site reports that 2008 is on track to be the coolest on average since 2000. The preliminary estimate by the UK Met Office is scheduled to be released formally next week. Based on data through October, the global yearly average is expected to be near 14.3°C, which is 0.14°C below the 2001-2007 average. Although the news is likely to be cheered on squawk radio and denialist web sites (It's already being featured here), the article notes:

The relatively chilly temperatures compared with recent years are not evidence that global warming is slowing however, say climate scientists at the Met Office. "Absolutely not," said Dr Peter Stott, the manager of understanding and attributing climate change at the Met Office's Hadley Centre. "If we are going to understand climate change we need to look at long-term trends." 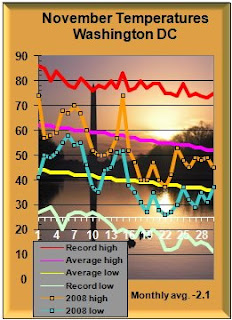 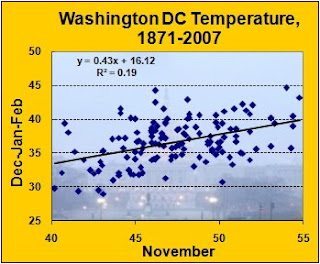 For more details on regression analysis and a discussion of the relationships between temperature and precipitation, see these blasts from the past:
Images: CapitalClimate charts from NWS data, photos © Kevin Ambrose
Posted by Steve Scolnik at 4:56 PM No comments: 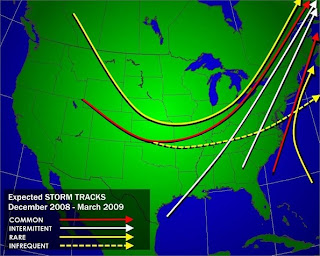 Images: Predicted storm tracks and snowfall potential for winter 2008-2009 from WEATHERAmerica.
Posted by Steve Scolnik at 5:15 PM No comments:

As noted in a previous post, among the records set in the 2008 hurricane season was the one for the "first time major hurricanes have been observed in five separate months". Even before this record became final, a new study analyzed the question of whether hurricane seasons are becoming longer in general. A paper describing the results of this study was recently accepted for publication in the peer-reviewed journal Geophysical Research Letters of the American Geophysical Union.

The study, by Dr. James P. Kossin of the Cooperative Institute for Meteorological Satellite Studies at the University of Wisconsin, first looked at the dates of the first storm and last storm for each season. The results showed that "the time of occurrence of the first and last annual formation events exhibit decreasing and increasing trends, respectively, suggesting that the length of the hurricane season is increasing." The chart to the right above shows a graph of the dates and trend lines. The red lines are the trends for the entire period 1851 to 2007. The blue lines cover only the period of aircraft reconnaissance data, and the green lines are for the satellite observation era.

Looking at just the first and last dates doesn't say anything about shifts in the distribution within the season, however, so Kossin also used a statistical analysis technique called "quantile regression." The quantiles represent subsets within the distribution. For example, 20% of the storm formation dates occur prior to the date at the 0.2 quantile. The quantiles, shown in the charts below (click to enlarge), indicate a negative trend (earlier formation) for the beginning of the season and a positive trend (later formation) for the latter part of the season. 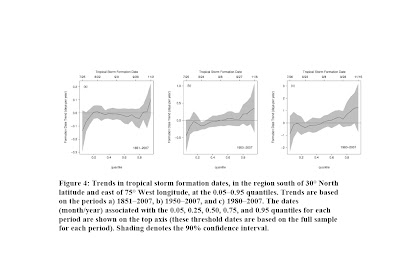 A consistent signal emerged that suggests the season has become longer as the earliest formation dates of the season have become earlier and the latest dates have become later. While the sign of these trends remain consistent when different periods are considered, the uncertainty is sometimes high. . . . The analyses presented here show how storm formation dates have been changing within the historical hurricane record, but cannot be used to directly implicate cause for these changes or to accurately predict future changes.

Posted by Steve Scolnik at 8:00 PM No comments: 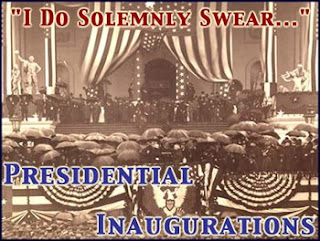 The National Hurricane Center Tropical Outlook on this final day of the official hurricane season notes that:

TROPICAL CYCLONE FORMATION IS NOT EXPECTED DURING THE NEXT 48 HOURS.

Jeff Masters has listed in his Weather Underground tropical blog a number of records set this season:
Posted by Steve Scolnik at 5:00 PM No comments:

Lame Duck Watch: And Don't Let the Door Hit You On the Way Out

Posted by Steve Scolnik at 4:31 PM No comments: