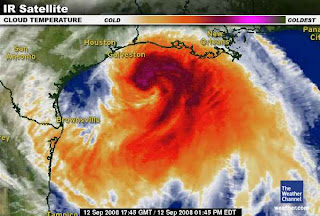 2 pm Update: Winds and storm surge are already being felt along the Texas coast as Hurricane Ike moves closer. Tide gauges in the Galveston area have measured surges of 6 to 8 feet as of 11 am CDT, and sustained winds as high as 52 mph have been reported from an oil platform 35 miles offshore.

Ike remains a Category 2 storm with maximum winds of 105 mph, but tropical storm and hurricane force winds continue to cover a very wide area. At 1 pm CDT, the center of the storm was moving west northwest at 12 mph from a position about 165 miles east of Galveston.

Original post:
Very large Hurricane Ike continues to head toward the Texas coast. Maximum winds increased a little overnight to 105 mph. The Houston/Galveston National Weather Service Office reported that an oil platform in the northwestern Gulf observed a sustained wind speed of 109 mph at an elevation of 400 feet. At 10 am CDT, an oil platform 35 miles east of Galveston was already reporting tropical storm force winds of 46 mph. Hurricane force winds extend outward up to 120 miles, and tropical storm force winds extend up to 275 miles, from the center.

The major threat from Ike is for flooding from storm surge which could be as high as 20 feet near and to the right of the storm's center. The Houston Chronicle is reporting online that water is already in the street in Galveston's Strand area.

This video from KTRK, via CNN, shows the extent of flooding already this morning on Galveston island:

Ike's appearance on satellite is somewhat less symmetric this morning, and the maximum winds are away from the center, but additional strengthening to lower Category 3 is still possible before the storm makes landfall. The hurricane has wobbled a little to the west, but the general track remains west northwest at a forward speed of 12 mph. A turn more to the northwest later today will bring the center to a landfall very near or to the south of Galveston early on Saturday. At 10 am CDT, the center was located about 195 miles southeast of Galveston.

The latest local Weather Service statements, including watches, warnings and evacuations, for affected areas from Texas through the northern Gulf are available here.
Posted by Steve Scolnik at 11:00 AM