Posted by Steve Scolnik at 10:15 PM No comments:

Winds of Change: Cleaning Up BushCo's Toxic Waste at EPA and Interior Department

The WaPo has emerged from its election-induced stupor to survey the task ahead of the incoming Obama Administration in repairing the damage done by the current White House Resident to the regulatory environment at the EPA and Interior Department. One example cited in the article:

EPA Administrator Stephen L. Johnson overruled his career advisers in deciding to deny California authority to control tailpipe emissions and rejecting their conclusion that global warming poses a threat to public welfare, and Obama is likely to reverse both of those policies shortly after taking office. This month, the president-elect told delegates to the Governors' Global Climate Summit that he would push for a federal cap-and-trade system designed to reduce greenhouse gas emissions to 1990 levels by 2020 and then to cut them an additional 80 percent by 2050, targets Bush has never embraced.

In the running for EPA Administrator, according to an accompanying feature, are Mary D. Nichols, current Chair of the California Air Resources Board, and Lisa P. Jackson, former chief of the New Jersey Department of Environmental Protection.

Webcasts (audio and video) of the Governors' Climate Change Summit, including the address by President-Elect Obama, are available on the conference's web site.
Posted by Steve Scolnik at 4:34 PM No comments: 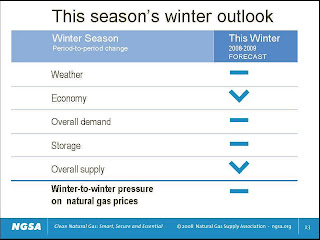 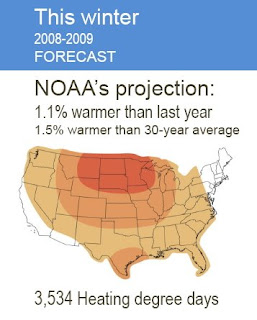 As a cold November in the Mid Atlantic region nears its end, consumers may be wondering about the outlook for heating costs in the upcoming winter. The Natural Gas Supply Association (NGSA) has released its winter 2008-2009 energy outlook (pdf file), calling for a flat trend in natural gas prices: 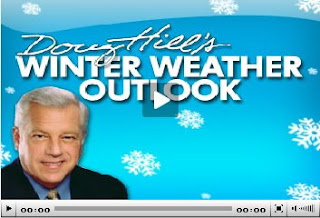 Another Washington, DC winter weather outlook; this one is from Doug Hill of WJLA, Channel 7:

This winter, we're predicting four times as much snow as last year, about 20 inches for the metropolitan area.

Posted by Steve Scolnik at 6:12 PM No comments: