Satellite imagery indicates that the Tropical Depression formerly known as Three has become better organized and is now Tropical Storm Bill with maximum winds of 40 mph. Bill is in the deep tropics, further south than Ana, and is well within the easterly trade winds. It's moving steadily a little south of due west around 16 mph, and a gradual turn to the west-northwest is expected. Bill has a large circulation and has favorable conditions for development, including light wind shear and warm water temperatures. It is expected to become a hurricane within 4 days.

At 11 am AST/EDT, Ana's maximum winds were 40 mph, and some slow strengthening is predicted. Movement is toward the west at 16 mph, with a gradual turn to the west-northwest expected. This track could bring the storm near the Leeward Islands by Monday. Ana is a small storm, and it is moving through a hostile environment of westerly wind shear and dry air, but the forecast track takes it over increasingly warm water. Most of the intensity models indicate that it could develop into a hurricane. Given the conflicting influences, however, the intensity forecast is more uncertain than usual; the official forecast keeps it lower than the models, at tropical storm strength.

Tropical Depression 3 formed late this morning in the eastern Atlantic. Maximum winds are 35 mph and movement is westward at 17 mph from a position about 740 miles west-southwest of the Cape Verde Islands. The intensity forecast calls for the depression to become a tropical storm in the next 12 hours and a hurricane within 3 to 4 days. All of the intensity models are predicting hurricane strength, with one of them forecasting a major hurricane. If it develops as expected, the storm will be named Bill. 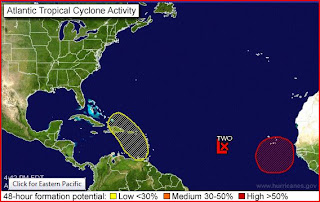 The persistent heat of Summer 2009 continues to break records in Texas, especially in the southern part of the state. For Corpus Christi and Victoria, the National Weather Service reports:
Posted by Steve Scolnik at 11:30 PM No comments:

The second tropical depression of the season formed in the Atlantic early this morning near the Cape Verde Islands. As of 11 am EDT, maximum winds were near 30 mph with some higher gusts. The depression was moving west at 13 mph, and this track is expected to continue for the next couple of days. Some slow strengthening is predicted, and the depression has the potential to become Tropical Storm Ana. However, sea surface temperatures along the track are only marginally warm, and there is drier air in the middle levels of the atmosphere. On the other hand, vertical wind shear is expected to be light for the next several days, which should encourage strengthening.

After a somewhat cool July, near record heat reached the Mid Atlantic area on August 10. The only record set appears to have been for the relatively shorter observation history at Washington Dulles (since 1963): The all-time August record at Dulles is 104° on the 20th in 1983.
Posted by Steve Scolnik at 1:10 AM No comments:

The National Weather Service reports that Austin, Texas broke its all-time monthly heat record in July. Records in Austin date back to 1854. San Antonio also had its hottest month since records began there in 1885. San Antonio also broke its record for the number of 100-degree days in a month.
Posted by Steve Scolnik at 6:47 PM No comments:

5 pm HST Update: Felicia has weakened slightly to maximum winds of 40 mph, and movement is to the west at 10 mph from a position about 210 miles east-northeast of Hilo, Hawaii and 375 miles east of Honolulu.

Original post:
Tropical Storm Felicia, with maximum winds now down to 45 mph, continues on a track toward Hawaii. At 11 am HST, the storm was moving westward at 12 mph. The Central Pacific Hurricane Center reports the following storm watches: The storm is expected to reach the islands on Tuesday as a tropical depression or possibly a weak tropical storm.
Posted by Steve Scolnik at 6:00 PM No comments:

After weakening to a tropical storm over the weekend, Felicia has shown little change in strength Sunday afternoon. At 5 pm HST, the storm was moving westward at 14 mph; maximum winds were near 50 mph. The Tropical Storm Watch has been extended to the island of Oahu:
Posted by Steve Scolnik at 11:44 PM No comments: