For related and more recent posts, see:
Washington DC's historic, record-breaking snowstorm in December set off a predictable flurry of "Where's global warming now?" snark in the deniosphere, but the final temperature figures from the month show a very different picture: Heavy snow is frequently uncorrelated with temperatures. The December 2009 average temperature of 37.9° was all of 1.6° below the long-term average. This made it the coldest December in the Nation's Capital since it was 36.4° in 2005. The month was one of five Decembers of the decade to be colder than average, but well above the 31.8° in 2000. For the decade overall, December averaged just 0.07° below normal.

Stay tuned next week for more analysis and charts of the monthly, yearly, and decade temperatures.
Posted by Steve Scolnik at 5:14 PM 5 comments: 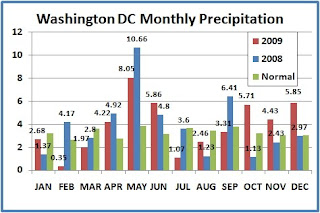 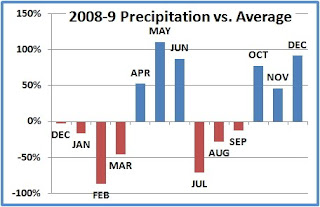 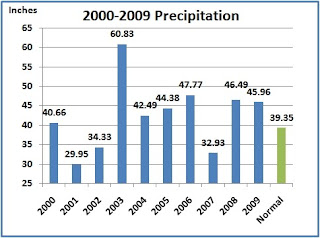 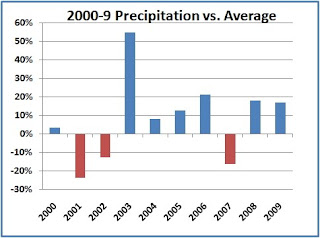 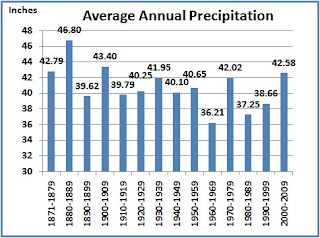 The final total for 2009 is 45.96", putting the annual average for the decade at 42.58". Six of the years in the decade have been at least 15% above or below the long-term annual average. That equals the maximum number of such extremes also observed in the 1950s and 1980s.

Tune in next week for temperature analysis.

Original post:
With 0.31" of wintry mix and rain showers so far this New Year's Eve day, the Washington, DC December precipitation total is now almost 90% above average. This is a little ahead of the 87% excess of June, but well short of the 111% in May.

December is the third consecutive month of much above average precipitation and the sixth of the year, with 5 out of the 6 being over 50% above. November, at 46% above, just missed the 50% level. Two of the dry months, February and July, were more than 50% below average, so a total of 7 months this year had more than a 50% deviation. This December is now the 7th wettest in Washington history.

Tune back in over the New Year's weekend for final monthly and annual totals, plus more charts.