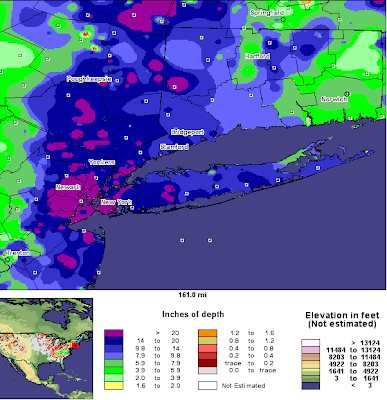 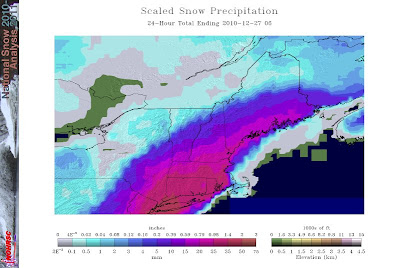 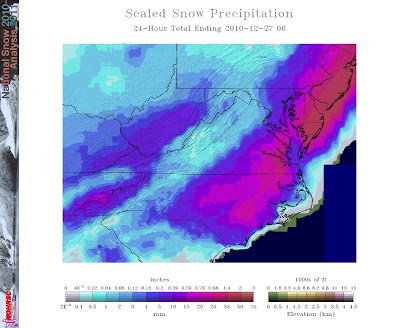 December 29 Update: The December 26-27 snowfall map (click to enlarge) from the National Weather Service shows that the bullseye of the storm was in the northern New Jersey/New York City metropolitan area. The Eastern Coastal and Northeast maps of 24-hour liquid equivalent for frozen precipitation show the heaviest amounts near and along the coast.

Maximum snow totals were in the Union County area of New Jersey, to the west of New York, where amounts in excess of 2 feet were common: Original post:
The National Climatic Data Center reports that the December 25-27 snowstorm set dozens of daily snowfall records from Alabama to Maine:
Posted by Steve Scolnik at 12:04 PM No comments:

2 PM Update: At 7 am EST this morning, as the center of the Northeast blizzard was passing close by, Nantucket reported a barometric pressure of 28.46" and falling. This was just slightly above the all-time mainland U.S. pressure record set just a few months ago in Minnesota. 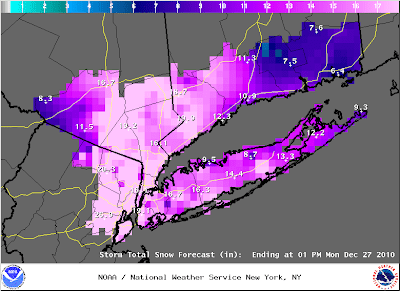 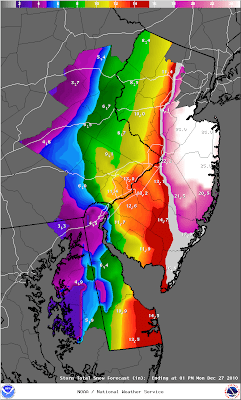 Here are some of the highest updated snowfall reports from the blizzard pounding the Northeast. The data have been compiled from National Weather Service offices from Philadelphia through Portland, Maine, as of noon, Monday, December 27: Original post: 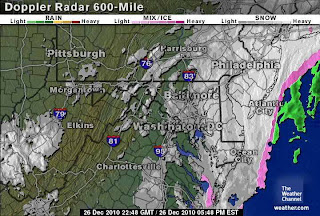 6 PM Update: Washington National has had a total snowfall of a trace as of 6 pm, despite reporting light snow almost continuously since 11 am this morning and also despite rampant hype-ocracy for days from the commercial media. As the storm moves away toward the northeast, as shown in the radar image from The Weather Channel, the highest snowfall amounts reported in the region are around 5" at 2 locations in St. Marys County in southern Maryland.

The daily total for Richmond has been corrected to 3.8" (0.7" of the storm total fell before midnight last night). The Norfolk total has increased to 12.5".

The map to the right shows the average temperature departure from climatology for December 1-24 in the U.S.

Original post:
The Christmas snow across parts of the southern U.S. set several records for the date. Overall, 12 daily snowfall records were set in the 6 states of the Southeast Regional Climate Center (Virginia through Alabama). The total number of daily low temperature records reported by the National Climatic Data Center in the entire contiguous 48 states from December 20 through 25: zero.

Here are some of the Christmas records compiled from National Weather Service reports.

Georgia:
At Macon, the 0.1" was the first measurable snow ever recorded on December 25. The 2" at Athens broke the old record of 0.2" in 1993. The 1.2" at Atlanta was the first measurable snowfall on Christmas since 1882. The most recent trace of snow at Atlanta on the date was in 1993. In all, Atlanta has recorded a trace of snow 13 times on December 25.

The Atlanta record low temperature for December 25 was 0°F in 1983. This year the low was 31°, barely enough to support the snow which fell. The records for the date at Macon and Athens are 7° and 3°, respectively, also set in 1983.

Alabama:
Huntsville measured 4.5" of snow on Christmas, smashing the old record of 0.3" set in 1989. The 1" of snow at Anniston was the first measurable amount on December 25 since records began in 1903.

Mississippi:
The estimated 1.4" reported at Tupelo was the first measurable amount of snow on December 25 in records which began in 1930. The last time a trace was reported was 1989.