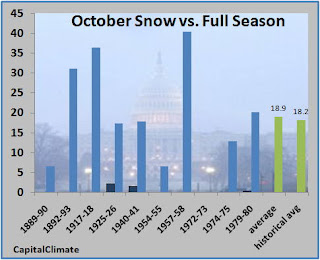 Today's remarkably early snowfall "battered" (seriously, the term used by a major media outlet) the Washington, DC metro area with widespread traces of snow. Here at the climate capitalist capitol, at least 100 meters higher than the official reporting location, there are white areas on grass and car tops. The official daily totals through 5 pm (and likely final amounts as the storm moves off to the northeast) are: The National and BWI amounts tied daily records from 1925 and 1952, respectively. The Dulles amount was a record for the date. However, all 3 totals fell short, in both amount and timing, of the records set for earliest measurable snow on October 10, 1979.

If March snow is rare in Washington, October snow is even rarer. Prior to today, a trace or more of snow had been observed in only 10 Octobers since official snowfall records began in 1888. Only 3 of those had measurable amounts: Does such early snowfall have any significance for the remainder of the season? The record says a resounding "No". The chart shows the October snowfall totals (dark blue) along with the entire seasonal amounts for each of the 10 seasons (lighter blue). Three of the snow seasons (1892-93, 1917-18 and 1957-58) had substantially above-average amounts of 30" or more. On the other hand, 3 other seasons had single-digit totals of under 7", including 1972-73, which had the lowest seasonal total on record of 0.1" (tied with 1997-98). Overall, the average of the 10 seasons with October snow was 18.9", just barely above the historical average of 18.2" for all seasons from 1888 through 2011 (green bars on the right).