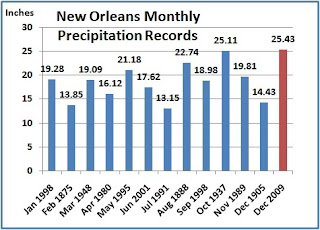 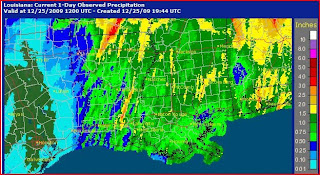 Original post:
As noted last week, New Orleans doubled its previous December precipitation record in the first two weeks of the month and was closing in on the all-time monthly record. With 0.36" of rain so far this afternoon in heavy thunderstorms, the monthly total is now 25.29", exceeding the previous record of 25.11" set in October 1937. Light rain continues to fall as more showers move through the area.

What we have here are thousands of emails collectively showing scientists hard at work, trying to figure out the meaning of evidence that confronts them. Among a few messages, there are a few lines showing the human failings of a few scientists…

. . .things that are unethical and in many cases illegal . . . willingness to destroy data rather than release it . . . bad things going on . . . elite hysteria . . . devastating for popular support for science . . . scandals, cheating and arguments . . . bizarre changes [to the data] . . . The public is being thrown catastrophes.

My view of the risk is that we have no other planet to retreat to if we are wrong.

Posted by Steve Scolnik at 10:12 PM No comments:


Original post:
After pounding the Washington/Baltimore area with record-setting snowfall, the Super Saturday storm left massive amounts of snow on parts of New Jersey, Pennsylvania, Connecticut and Long Island before departing out to sea. Nevertheless, a report from Bloomberg today indicates that last-minute shopping in the remaining days before Christmas may make up for lost sales over the weekend. Despite the reputation of "Black Friday", the maximum day for retail sales is usually "Super Saturday" on the weekend before Christmas. Overall, the 10 days before the holiday make up 40% of sales for the months of November and December, according to Bloomberg.

The NYT, on the other hand, was more cautious, pointing out that the region affected by the storm accounts for about 25% of a typical national retailer's total sales:
Storm on Big Weekend Raises Worries for Stores

The FT reported:
US retailers hope for last-minute gift buying

Some more records set by the storm:

On Long Island, the 26.3" of snow at the National Weather Service office in Upton set a new single storm record, breaking the old record of 23.0" in the blizzard of 1978.

The storm total of 23.2" at Philadelphia is the second highest all-time storm total. The record is 30.7" in the blizzard of January 1996.

Many locations set individual daily records for December 19 or 20.
Posted by Steve Scolnik at 1:10 AM 3 comments: