Within the last hour, by a 3-vote margin, the U.S. Senate has defeated a resolution by Republican Sen. Lisa Murkowski of Alaska which attempted to override the Environmental Protection Agency's authority to regulate greenhouse gases under the Clean Air Act. The vote, 47-53, was almost exclusively along party lines. The only 6 Democrats voting in the affirmative were:
Not one single Republican voted against.

Video of the debate and vote is at CSPAN.

In an editorial today, the WaPo said "attempting to strip the agency of its authority to regulate is premature."
Posted by Steve Scolnik at 4:41 PM No comments: 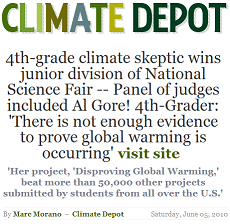 June 9 PM Update: The Beeville Bee-Picayune has concluded its exhaustive investigation and within the last hour or so has published the results:
It’s a hoax

Credit is given to an "overwhelming number of bloggers in the online science community." Regarding the possible origin of the fraud, the article says, "Some suspicions have arisen about Julisa’s father, Dr. [sic] J.R. Castillo, a local engineer and musician." The commentariat at Reddit have some more specific ideas.

Upon inquiry from MT, the NSF responded, "The letter is not authentic, Linda [Slakey] had no knowledge of it, and it amounts to fraudulent use of our name and logo." The NSF has referred the matter to its Office of Inspector General for investigation.

Although Climate Depot has posted an update ("4th-Grade Skeptical Climate Science 'winner' revealed as hoax!"), as of now the Google search "julisa castillo" + "science fair" + correction has only 3 hits, none of which are actual corrections.