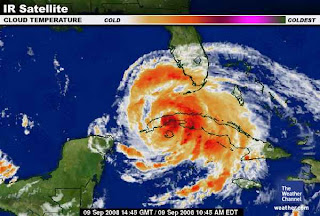 At 10:30 this morning, Hurricane Ike made a second Cuban landfall. The center of the storm crossed the south coast of western Cuba in extreme southeastern Pinal Del Rio province. Ike is continuing to move west northwest at 13 mph from a position 55 miles southwest of Havana. On this track, the hurricane will cross western Cuba and emerge into the Gulf of Mexico this afternoon.

Reconnaissance data indicate that Ike is a Category 1 storm with maximum winds of 80 mph, although recent satellite images imply a stronger storm. Models show a wide range of strengthening in the next several days, but Ike is likely to be a major hurricane in the Gulf.
Posted by Steve Scolnik at 11:05 AM