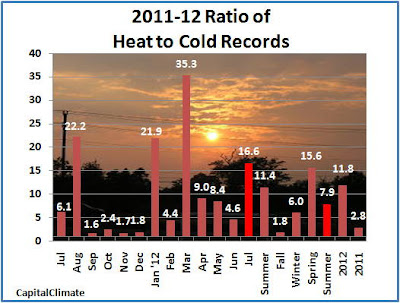 The heat record count is a little less than half of the 6,788 records set in the record hottest month of July 1936, which is actually quite impressive given the additional 76 years of data since then. Furthermore, this July's ratio is 23% higher than the 13.5 in 1936.

Image (click to enlarge):
- Monthly ratio of daily high temperature to low temperature records set in the U.S. for July 2011 through July 2012, seasonal ratio for summer and fall 2011, winter, spring and summer 2012 to date, and annual ratio for 2012 and 2011.
CapitalClimate chart from NOAA/NCDC data, background image © Kevin Ambrose (www.weatherbook.com). Includes historical daily observations archived in NCDC's Cooperative Summary of the Day data set and preliminary reports from Cooperative Observers and First Order National Weather Service stations. All stations have a Period of Record of at least 30 years.
Posted by Steve Scolnik at 1:55 PM No comments: 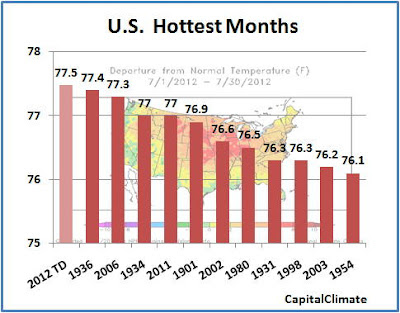 Aug. 7 Update: Preliminary unadjusted data from NCDC show the July average at 77.3°, which is 0.1° below the record.

Original post:
The preliminary weekly temperature analysis, posted this morning by the National Climatic Data Center (NCDC), continues to show July 2012 as the hottest month in U.S. history. The national average temperature for the week ending July 28 increased to 77.6°, which is 3° above the climatological normal. The month-to-date average of 77.5° is 0.1° above the all-time hottest month of July 1936.
Posted by Steve Scolnik at 10:41 AM 2 comments: 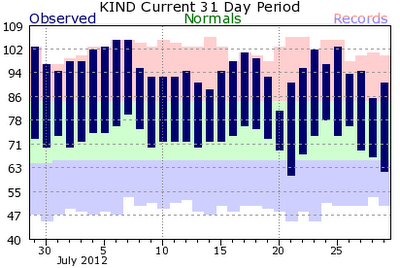 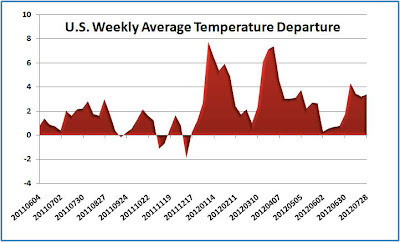 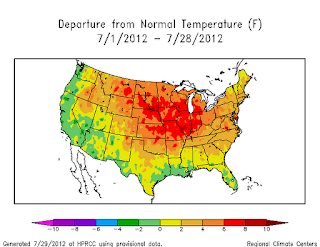