Posted by Steve Scolnik at 6:33 PM No comments:

For over a century, commodity exchanges have provided a way to hedge against (or speculate on) price fluctuations for crops, livestock, metals, and other materials. More recently, financial products have been developed which allow investment directly in the weather conditions which can in turn affect commodity prices. Last winter, for example, the CME Group introduced options based on the amount of snowfall in 5 U.S. cities. Joining the existing snowfall and temperature products, the exchange last week began offering contracts on rainfall amounts.

The 9 cities involved with the new investments are:
CNBC this morning interviewed the president of Chicago Weather Brokerage, which specializes in this type of product. Although acknowledging that trading in the new contracts has been negligible, Jeff Hodgson was bullish on potential market opportunities.

More background from Medill Reports of Northwestern University:
A new Chicago brokerage plans to take uncertainty out of the weather
Posted by Steve Scolnik at 5:27 PM No comments: 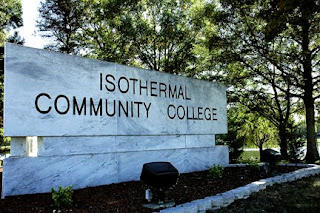 An AP story, posted at wsj.com, reports that Facebook has picked North Carolina for its second dedicated data center. The site is located near Forest City in Rutherford County, which is in the western portion of the state near the South Carolina border.

One of the factors cited in the choice of location is "relatively inexpensive power", although the NYT Bits blog notes that "about half of the electricity in Forest City, North Carolina, is coal-generated, in line with the national average." On the other hand, the Prineville, Oregon site of Facebook's first data center has been criticized because the local utility there generates its electricity mainly from coal.

Another factor reported in the AP/WSJ article is the climate, since "extremes of cold and heat are a challenge for facilities with huge amounts of sensitive electronic equipment." Isothermal Community College, in nearby Spindale, was in fact named for the moderate "thermal belt" in the region. Interestingly, the current Weather Underground forecast for Rutherfordton, the county seat, shows a variation of only 5° in the high temperatures for the next 5 days. However, the daily record highs and lows for Rutherford County-Marchman Airport (KFQD) show maximums over 100° in August and minimums below 10° in January.

A more likely explanation for picking this location is the business climate, in the form of considerable tax breaks and government incentives. The NYT's Bits reports that "Facebook will receive approximately $17 million in local subsidies and tax breaks over 10 years" and "will also be exempt from paying state taxes on all equipment, electricity and construction materials for the data centers." 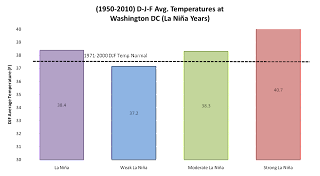 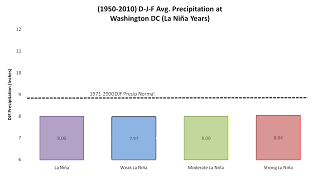 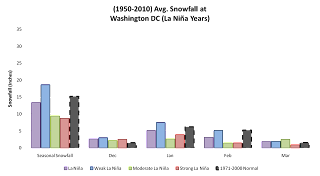 As noted earlier, NOAA's Climate Prediction Center expects the 2010-11 U.S. winter to be dominated by a strengthening La Niña sea surface temperature pattern in the equatorial Pacific. For the Mid Atlantic region, this implies nearly equal chances of above or below average temperatures and precipitation.

The National Weather Service (NWS) has analyzed the temperature and precipitation for December-January-February (DJF) in years since 1950 with La Niña conditions. They find that there is a statistical correlation between the strength of La Niña and Washington/Baltimore area temperatures: Weak La Niña years have slightly below-average temperatures, while moderate years are slightly above average, and strong years are more above average.

Winter precipitation in La Niña years on average is below normal by about 10%. This is true pretty much independently of the strength of the La Niña. For snowfall, however, weak La Niña years average above the long-term mean, but moderate and strong years have below-average amounts. This is especially true for the main snowfall months of January and February. The NWS concludes that this is the result of the more westerly storm tracks and warmer temperatures which are associated with the stronger La Niñas: "More storms tracking to the west of the Appalachians would imply the mid-Atlantic region being located on the warmer side of storms, resulting in more mixed or rain events for the area and less snow events."

Posted by Steve Scolnik at 5:33 PM No comments: 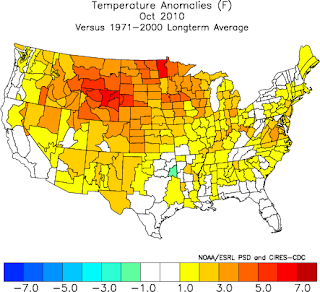 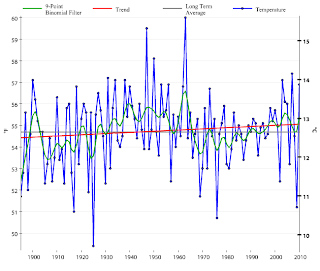 Posted by Steve Scolnik at 2:13 PM No comments: