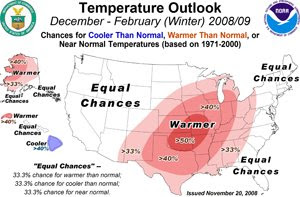 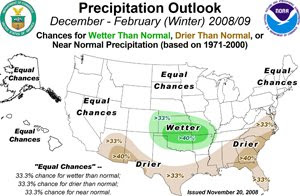 The Winter 2009-2010 outlook is here.
Other seasonal forecasts, including the current winter energy forecast, are also available.

NOAA's Climate Prediction Center announced today the official outlook for meteorological winter (December-January-February). With the expected absence of any strong El Niño/La Niña effects from Pacific Ocean temperatures, conditions are likely to be variable. Temperatures, however, are forecast to be near or above normal everywhere in the continental U.S. Precipitation is forecast to be higher than normal in parts of the central Plains, and drier conditions are likely in the Southeast, Gulf Coast, and portions of the Southwest.

In contrast to many media outlets and web sites which hype their winter snow outlooks to increase their broadcast ratings or page views, NOAA recognizes that there is absolutely no scientific basis for such predictions:

"Snow forecasts are heavily dependent upon winter storms and are generally not predictable more than several days in advance."

One broadcaster's view of the winter outlook for the Washington, DC region:

In another sign that change is coming to Washington, Rep. Henry Waxman of California today replaced the venerable Rep. John Dingell of Michigan as chairman of the powerful House Energy and Commerce and Committee. Dingell, age 82, has held the chairmanship whenever Democrats have controlled the House since 1981. As a representative from Michigan, Dingell has consistently supported the interests of the auto industry on energy and environmental issues. Waxman, on the other hand, has been an advocate for stronger action on clean energy and climate legislation.

I am honored by the vote of the Democratic Caucus. We are at a unique moment and have an opportunity that comes only once in a generation. I will work with all parts of our Caucus and across the aisle to deliver the change that the American public expects us to deliver.

I have worked with Chairman John Dingell for 34 years. He has been a true legislative champion. I will always admire and respect him and his many legislative accomplishments.

From around the Internets:
Posted by Steve Scolnik at 6:00 PM No comments: