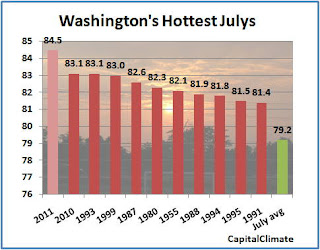 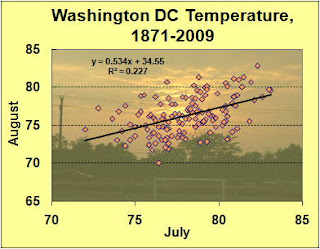 Strange behavior in the climosphere, from The Onion (h/t to MT):

Posted by Steve Scolnik at 9:30 PM No comments:

Original post:
After getting an all-time record daily rainfall on Saturday, Chicago received another 0.71" on Wednesday, July 28. This pushed the monthly total to an all-time July record of 9.75". An additional 0.06" has fallen so far today, raising the amount to 9.81". July 2011 is now the 9th wettest calendar month at Chicago.

The 10 wettest months at Chicago are: Rainfall amounts for the 24 hours ending this morning were considerably higher in Lake County to the north:
Posted by Steve Scolnik at 2:45 PM No comments: 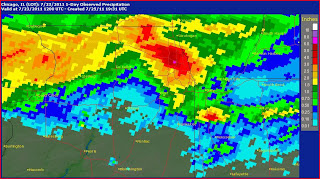 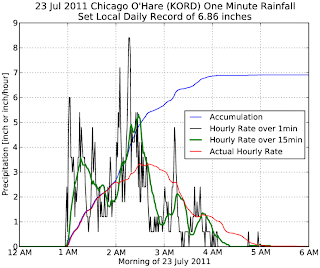 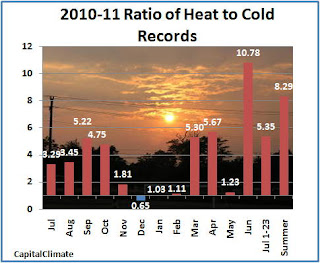 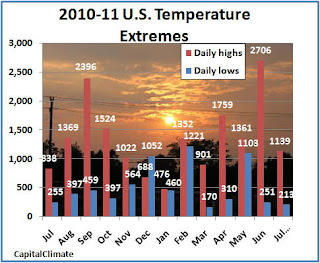 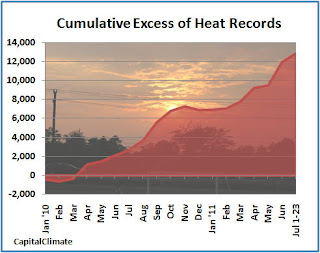 They haven't matched the incredible pace of June records, but U.S. temperature extremes this summer continue to overwhelmingly favor hot records vs. cold records. Through the 23rd, the number of daily high temperature records reported by the National Climatic Data Center (NCDC) in July outnumbered low temperature records by a ratio of over 5 to 1. Combined with June's torrid ratio of nearly 11 to 1, the ratio for the summer to date stands at 8.3 to 1. For the year 2011 to date, as well as the last 12 consecutive months, the ratio has risen to 2.6 to 1.

December 2010 is now the only month in the past 17 consecutive months with more cold records than heat records, and that was only by the slim margin of about 1.5 to 1.

Results have been particularly dramatic for longer-term records. A total of 65 all-time July monthly heat records have been set so far vs. only 8 monthly cold records, for a ratio of over 8 to 1. Out of those July monthly records, 44 were all-time record highs for any month.

The National Weather Service reports:
Posted by Steve Scolnik at 1:49 AM No comments:

Image (click to enlarge): Graph from National Weather Service shows temperatures above 80° at Washington, DC for over 4 consecutive calendar days.

July 25, 2 PM Update: Thunderstorms have dipped the temperature to 82°, so the record is still in play, if barely.

July 25, 10 AM Update: With increasing chances for thunderstorms today, it's unlikely to persist through midnight, but this morning's low temperature of 80° would break the high minimum record for the date of 79° set in 1965. It would also stretch the record of consecutive calendar days at 80° or above to 5.

Original post:
With a temperature of 84° at 1 am (midnight standard time), the low temperature for Sunday, July 24, at Washington, DC broke the record warmest minimum for the date by 3°. The previous record was 81°, set just last year. The 84° low on the previous day also broke a daily record by 3°; that record was set in 1978. These 2 consecutive minimums also tied the all-time record high minimum set on July 16, 1983.

This means that for the first time in records which date back 140 years to 1871, the Washington temperature has failed to go below 84° for over 48 consecutive hours. The continuing heat has also extended to 4 days a record stretch of temperatures of 80° or above. The temperature has been above 80° continuously since 8 am on Wednesday, July 20.