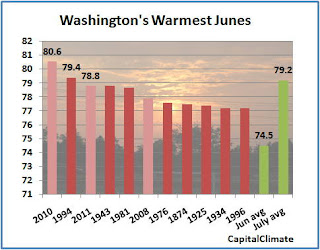 Original post:
Following last year's all-time hottest June, this month is closing out tied for third hottest in Washington, DC. Preliminary National Weather Service data analyzed by CapitalClimate indicates that the June 2011 average temperature of 78.8° is tied with 1943 as the third hottest June in temperature records which began 140 years ago in 1871. (Depending on rounding, the final figure may be 78.7°.)


In The Know: Coal Lobby Warns Wind Farms May Blow Earth Off Orbit
Posted by Steve Scolnik at 1:36 AM 2 comments: