With the overwhelming quantity of global warming material on the Web, it's a lot of work to separate the Drudge Sludge from the Real Deal. CapitalClimate has a set of links to various climate tutorials and references in the left column of this page. A post today at RealClimate points out that David Archer of the University of Chicago has now uploaded video of his entire course called Global Warming. The course description:

This 10-week course for non-science majors focuses on a single problem: assessing the risk of human-caused climate change. The story ranges from physics to chemistry, biology, geology, fluid mechanics, and quantum mechanics, to economics and social sciences. The class will consider evidence from the distant past and projections into the distant future, keeping the human time scale of the next several centuries as the bottom line. The lectures follow a textbook, "Global Warming, Understanding the Forecast," written for the course.

The files are in Quicktime format (m4v), which should be iPod compatible.
Posted by Steve Scolnik at 4:47 PM No comments: 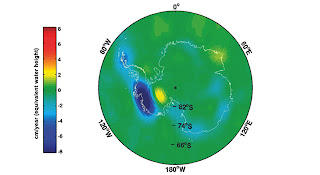 Image (click to enlarge): GRACE estimate of Antarctic ice loss, from University of Texas at Austin Center for Space Research
Posted by Steve Scolnik at 1:50 PM No comments: