Climate Change We Can All Believe In

And now for something completely different:

Cloudy With a Chance of Meatballs: a perfect food storm
Opens September 18 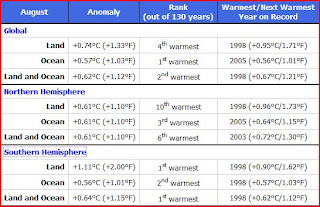 Images (click to enlarge): August 2009 global temperature departures from normal, history since 1880, and table of departures by hemisphere from National Climatic Data Center

The National Climatic Data Center preliminary analysis for August 2009, released within the last 2 hours, shows that this was the second warmest August on record globally, and the warmest for both the world's oceans and the Southern Hemisphere (land and ocean combined).

Here are some highlights for the month:
For the season June-August (summer in Northern Hemisphere):
For the year to date, the combined land and ocean surface temperature tied with 2003 as the 5th warmest January-August on record.
Posted by Steve Scolnik at 1:42 PM No comments:

One of the unintended consequences of commercialized blogging is that it creates whole new areas of conflict of interest for the traditional media attempting to make the transition to the online world. The high-fiber media have always been subject to the possible interference between the business side and the editorial side of publishing. In a recent example, WaPo publisher Katharine Weymouth absolutely, positively, in no way interfered with an article being written for the newspaper's Sunday magazine:
Post Magazine Killed 'Depressing' Story.
No. Really. All just a coincidence.

The online arena provides a new dimension, however. Among the usual denialist rants in response to a recent pathetic Climate Despot style hack job at the online WaPo's weather blog was this little fact-free gem by one "gpp1111" (spelling and grammar preserved):

What is of most concern is how skeptics of the global warming theory are treated. I have in the past made comments on blogs only to find that people had researched who I was. They don't answer my questions or debate the facts, what they want to know is who is making the argument. I have been accused of being paid by the fossil fuel companies (I wish I was), many supporters of the theory seem to think any contrarians must have alterior motives (than just the truth). To be called Holocaust deniers, flatlanders and such, using disparaging comments, ad hominem attacks, must be similar to what other skeptics experienced in 1930's Germany, skeptics of you know who. Have not noteable scientists who support the theory called for Nuremburg style trials. http://www.dailykos.com/story/2008/6/23/17350/3999/231/540815 Science is not supposed to have consensus. Consensus is a political term. Many/most scientific discoveries have come from contrarians. It is dangerous to promote consensus on any subject by simply savaging your opponents (or trying to do so). Fortunately the truth has its own power. Mother Nature is weighing in on the subject. Some alarmists are now agreeing that temperatures might fall for the next 20 years (but they say this gives humanity more time to prepare for the inevitable warming and just wait and see how hot it is going to get once the 20 years of cooling is over). The past ten years of cooling temperatures show that "natural forces" are more powerful than man made ones. It never crosses the alarmists minds that perhaps these same natural forces that are making the earth cooler also made it warmer from the late 70s to the 90s. Delaying cap and trade legislation now is critical because it will be even more difficult in the future to pass it when cooler temperatures (and the resulting shorter growing season) are felt by people throughout the globe. www.isthereglobalwarming.com

The initials gpp are fairly generic, but some determined Googling against the referenced web site along with a good memory for names and an extensive bookmark list turned up some interesting connections, especially a comment earlier this year at Chris Mooney's Intersection blog:

Mr. Pohanka, as one whose family is heavily invested in the automotive dealership industry, thus has a vested interest in denying global warming as the automobile industry is one of the major contributors to the production of carbon dioxide and other carbon emissions. Because of course, measures to alleviate such production will probably have a negative effect on that industry. Nice try Mr. Pohanka but its pretty hard to hide from Google.

Apparently Pohanka had no problem appearing in public when he was recently interviewed on the PBS Nightly Business Report, where he was identified as the president of Pohanka Automotive Group, whose 14 dealerships in the Washington, DC area had sold 800 cars under the Cash for Clunkers program and was awaiting $3 million from the government in payments.

Under the WaPo's "free speech" policy, gpp1111 is just another grassroots guy/gal from Woodbridge or Wherever, whereas in reality he has a vested interest in policies that allow him to sell more high-profit SUVs and trucks while he feeds at the public trough for stimulus money and the WaPo rakes in more revenue (originally typed "profits" here, but braincheck overruled, considering the state of the publishing business) from one of its major remaining advertisers.

The National Climatic Data Center posted its preliminary analysis of August temperatures on Thursday. Continuing a trend of cooler-than-average temperatures in the Midwest and Northeast, August was the 30th coolest on record, and meteorological summer (June-August) was the 34th coolest. Unlike July, however, when records were set in 6 states, no statewide records were set. The coolest states relative to average were:

On the other hand, several Northeastern states were in the top 10 warmest:

The summer average of 71.7°F was 0.4°F below the 20th Century average. In the top 10 coolest summer category were:

In the top 10 warmest category: