As noted here at the time, the reported precipitation from National Airport in connection with the record-breaking December snowstorm appeared to be incomplete. The National Weather Service monthly climate summary for December 2009 is now showing a more realistic 1.34" for the 19th, as compared with 0.40" previously reported. This brings the corrected December total to 6.79", which would now be the second wettest December in history. The National Climatic Data Center statewide data (see previous post) show that December was the wettest on record in both Maryland and Virginia.
Posted by Steve Scolnik at 6:52 PM No comments: 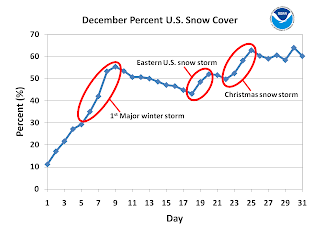 
The cold Arctic outbreak dominating much of the U.S. has driven up orange juice prices as freezing temperatures in Florida have threatened the crop near harvest time. Prices surged on Monday by 10 cents (7.8%) to reach the daily trading limit. The Wall Street Journal reported late this afternoon, however,

Despite moving sharply higher in early trading after gaining 12% over the previous two sessions, orange juice futures finished marginally lower Wednesday. Market participants took heart in the fact that crop damage overnight appeared to be minimal, as temperatures in the heart of the citrus belt remained just above critical levels. Citrus fruit sustains damage when readings dip below 28 F for three or more hours.

Several daily temperature records have been broken or tied across the state. For Wednesday, January 6: For Tuesday, January 5: For Monday, January 4:
Posted by Steve Scolnik at 6:15 PM No comments: 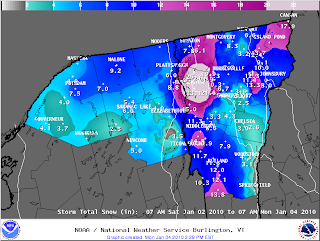 The heavy snowstorm which affected northern New England over the weekend put Burlington, VT directly in the bullseye. The National Weather Service reported on Monday that the storm total of 33.1" at Burlington International Airport set a new all-time snowfall record for a single storm. The old record was 29.8" in December 1969.

Other storm totals around the northeastern New York/Vermont region are listed below.

The top 5 Burlington snowfalls are now: Image (click to enlarge): Total snowfall from 7 am Saturday, Jan. 2, through 7 am Monday, Jan. 4, 2010 from National Weather Service
Posted by Steve Scolnik at 12:55 AM No comments: