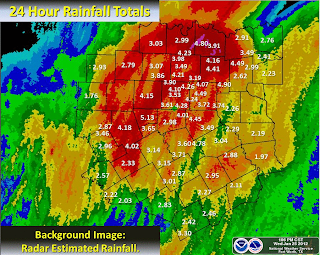 Note: Although the Dallas/Ft. Worth climate record is considered continuous back to 1898, data have been collected at several locations in the area:
Image (click to enlarge): 24-hour rainfall totals ending 1 pm CST, January 25, 2012, in the Dallas region, from National Weather Service
Posted by Steve Scolnik at 5:49 PM 3 comments:

The good news: Electricity generation from coal is declining sharply in the U.S., from 50% 2 years ago to 43% today.

The bad news: The reason for the drop is that there is a "virtually infinite" supply of natural gas. The lowest gas prices in at least a decade ($2.34 Friday morning) are making coal-fired power plants uneconomical. Out of 350 gigawatts of coal capacity, roughly 50 gigawatts are at risk for replacement by cheap gas.

Posted by Steve Scolnik at 6:44 PM No comments: