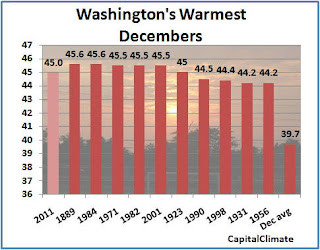 Watch How 2011 Became a 'Mind-Boggling' Year of Extreme Weather on PBS. See more from PBS NewsHour.

Posted by Steve Scolnik at 12:43 AM No comments:

The 0.06" of rainfall through 4 pm today pushes the Chicago year-to-date rainfall to 49.41", exceeding the previous second highest annual total recorded in 1983.
Posted by Steve Scolnik at 9:26 PM No comments: 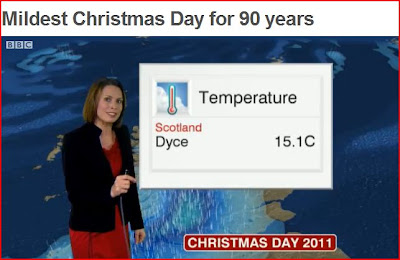 The Beeb reports that Christmas 2011, the mildest in 90 years, was the third warmest in history for the UK. The highest temperature of 15.1°C was actually reported in the north, at Dyce, Scotland.

For a full video report, click here.
Posted by Steve Scolnik at 12:52 AM No comments:

Yet Another Top-10 Warmest Year for Washington;
2011 To Rank 4th Highest in 141-Year Heat Parade 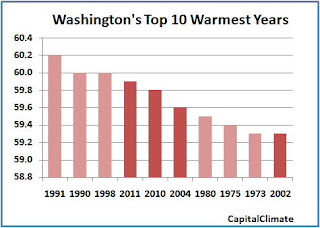 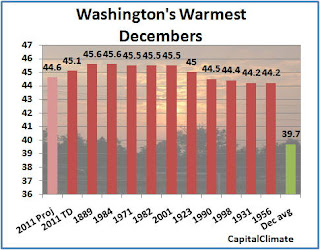 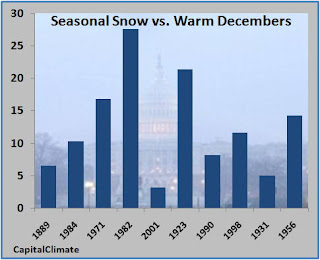 Bumping 2006 into the 11th position, this year will take its place as the 5th year out of the last decade to be in the top 11 of all time. Three of the top 6 warmest years have now occurred in the 8 years beginning with 2004.

Projected temperatures for the remainder of this week, while above the seasonal average, will likely lower the monthly mean to 44.6°, but that will not be enough to change the yearly average. The projected average would make this month the 7th warmest December in history.

Indications for rest of winter?

As reported here 6 years ago, December temperatures are virtually uncorrelated with January's in Washington. However, looking just at the warmest Decembers, there is some indication that seasonal snowfall is likely to be below average. For the previous 10 warmest Decembers, the average total seasonal snowfall was 12.5", compared with a 1981-2010 average of 14.5". Only 3 out of the 10 seasons were above average. The highest was 27.6" in 1982-1983. Note, however, that 6.6" of that had already fallen in December, compared with a trace this year; the remainder occurred in February.