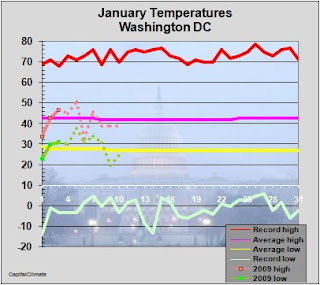 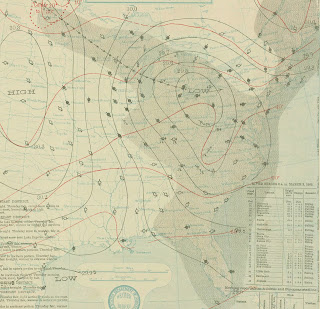 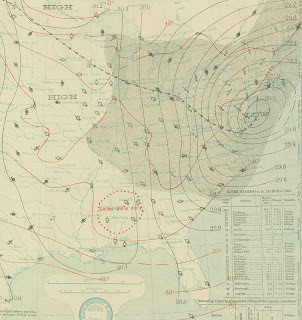 This year is the 100th anniversary of the great Presidential Inauguration forecast bust of 1909. The history of weather forecasting is replete with major errors, but few can compare with the spectacular public embarrassment of the forecast for the inauguration of President Taft on March 4, 1909.

On Inauguration Day, under the headline, "A FAIR INAUGURATION DAY", the New York Times reported on page 1 that "clear skies and bracing temperature" were forecast. Weather Bureau Chief Willis Moore said, "It will be a clear day with plenty of sunshine and invigorating air. The temperature will range between 35 and 40 degrees, and every indication points to the best weather conditions."

The forecast was made in spite of the fact that heavy rain had moved into Washington the night before and turned to snow with high winds. The Times noted that the storm had driven "more than 100,000 inauguration visitors from the slush covered streets and avenues." By extrapolating current trends, the forecasters were counting on the storm, which had rapidly moved in from the west, to continue eastward, followed by clearing high pressure. In fact, the storm slowed and strengthened off the Mid Atlantic coast, bringing heavy snow to much of the region.

As a result of the storm, the swearing-in ceremony was moved inside the Capitol for the first time since the second inauguration of Andrew Jackson, although skies began to clear as the new president left for the White House. The parade was held as scheduled with "crowds which stood unmindful of the ankle-deep snow and slush about them," as the Times reported the next day.

The severity of the weather required news reports of the inauguration to be carried by train to Philadelphia, where they could be relayed by telegraph. The Times reported:

On the greatest day of its last four years Washington was almost completely isolated, so far as telegraphic or telephonic communication with the rest of the United States was concerned. The storm played the worst kind of havoc with all wires. For many miles between here and Baltimore and other cities to the north both telegraph and telephone wires gave way under the mass of sleet and snow that clung to them, and poles were broken by the high wind.

The day after the inauguration, Prof. Edward Garriott, official forecaster of the Weather Bureau, gave the rather lame explanation, "It was a 'flareback' from the storm which had passed off the coast of Long Island some hours before, and therefore could not have been foretold by weather forecasters."

Weather Bureau Chief Moore, who had been in office since 1895, was fired by the president right after the inauguration, but it was the following inauguration of President Wilson in 1913. More about that event in a future post. 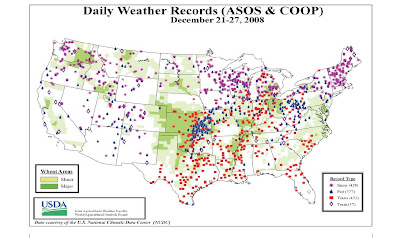 Recently, we noted the remarkable number of high temperature records set over a large area of the U.S. Meanwhile, Tim Lambert at Deltoid was pointing out the pimping of the snow records being set, particularly in the Pacific Northwest, by the Drudge-amplified deniosphere ("Denialists scraping the bottom of the barrel").

For more analysis on this subject, see "Shoveling Out From a Snow Job". 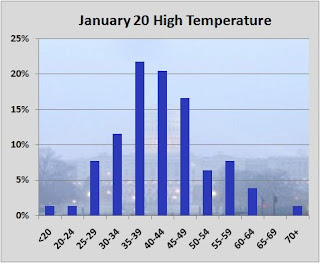 Click here for previous Inauguration weather posts, including a year-by-year chart of high and low temperatures and precipitation.
Posted by Steve Scolnik at 4:53 PM No comments:

Countdown to a Change of Atmosphere:
Inauguration Weather Watch 2009

Inauguration Day, January 20, is now 3 weeks from tomorrow. That's beyond the range of accurate daily weather forecasting, but general trends are at least beginning to emerge for the early part of January.

The latest extended-range forecast from the National Weather Service's Climate Prediction Center calls for nearly equal chances of above or below average temperatures in the Mid Atlantic region for the 6-10 day period Jan. 4-8. For Jan. 6-12, however, below-average temperatures are more likely.

Stay tuned; the first extended range forecast to include Inauguration Day will be issued a week from tomorrow.

The Weather Channel reports on the air that at least 75 high temperature records were set Saturday and Sunday, December 27-28. In Washington, persistent clouds kept the high of 70° from reaching the 1946 record of 75°, but the record high minimum temperature of 50° for the 28th (dating back to 1881) was tied.

Here are some of the records tied or broken (previous record and year in parentheses):

Here's an interview from last July in which Presidential Science Adviser nominee John Holdren explains why the term "global warming" is too simplified to accurately describe climate change:

Posted by Steve Scolnik at 6:46 PM No comments: