Some Pain Leads to Weekend Gain

Now
Cloudy, cool. A stationary front nearby to the south and an easterly breeze have kept temperatures struggling to break the 60° mark in the Washington metro area this afternoon. Showers and sprinkles have been very widely scattered, with only a trace officially reported. By late afternoon, the leading edge of a widespread area of rain had just reached the southern portion of the Virginia/West Virginia border. Showers are more likely overnight and part of Friday, leading up to a nice weekend. 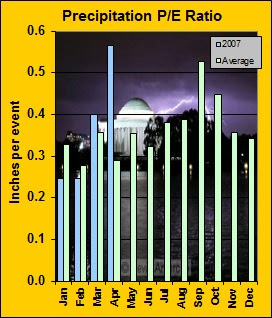 As we noted last fall, there was a tendency in 2006 for above-average precipitation to occur in a fewer than average number of events. That pattern has been repeated this month: The total rainfall is already over 40% above the long-term average, but only 7 days so far have had measurable precipitation, compared with an April average of 9.6. The bulk of this month's precipitation was the 2.55" which fell in 24 hours on the 14th-15th, and there has been no measurable amount since.

Programming Note: PM Update will be taking off tomorrow through next week. Behave yourselves until we get back.
Posted by Steve Scolnik at 5:15 PM No comments:

Summer Preview Ending After Many Thumbs Up


Sunny, very warm. Despite a cold front slowly approaching from Pennsylvania, sunny skies and temperatures in the low 80s have once again prevailed over the Washington metro area this afternoon. This morning's low of 64° was only 1° short of tying the record highest minimum temperature for the date. Scattered showers on radar were limited mainly to the Northern Neck of Virginia. The curtain will fall on this summer preview as cooler air and some showers work their way into the region tomorrow.

Increasing clouds, cooler, showers developing. Clouds will increase tonight with lows in the low to mid 50s. Tomorrow will be mostly cloudy and cooler with a 70% chance of showers and possibly thunderstorms, mainly in the afternoon and evening. Highs will be in the upper 60s.

CapitalWeather.com's own Andrew Freedman had a post yesterday about the Earth Day Greenfestival events in Chicago on The Weather Channel's climate blog.

The discussion reported here yesterday about hurricanes and global warming continues with a post this morning at RealClimate, "Hurricane Spin". Their conclusion:

"The findings of V+S [the new paper] represent an important contribution to the ongoing scientific discourse on the issue of climate change impacts on tropical cyclones, and the study should spur additional work looking at the complicated issues involved in greater detail. It remains the case that the modeling of Hurricane-climate change interactions is still at a relatively primitive stage and this study is very unlikely to be the last word."

Today's hearing by the Senate Environment and Public Works Committee, "Supreme Court Decision on EPA Greenhouse Gas Responsibility", is one of several on the Hill agenda this week regarding global warming and other environmental issues. Scroll down in the linked post for live blogging of yesterday's Energy Efficiency Promotion Act hearing.

GE compact fluorescent bulbs are featured at Giant this week on sale for 80% off ($1 each). As of this afternoon, however, they were totally sold out in this particular area of MoCo.
Posted by Steve Scolnik at 4:45 PM No comments:

Sunny, very warm. A schizophrenic April which can't seem to make up its mind between being like February or June is spending more time in the summer category today. Temperatures have once again surpassed 80° with low humidity; mid or even upper 80s were common throughout the Washington metro region by mid afternoon. The nearly perfect conditions will go downhill by late tomorrow, with some showers likely for midweek.

Increasing clouds, warm. Tonight will be partly cloudy with summer-like lows near 60° downtown to the upper 50s in the 'burbs. Tomorrow will be mostly sunny with highs in the upper 70s to near 80° and a chance of showers at night.

Tempest in the Tropical Blogosphere

Knowledge of climate change has increased dramatically in recent decades, but there is still much that is not fully understood, particularly the details of the effects on specific locations. One of the important areas of uncertainy involves the relationship between global warming and hurricanes. A paper by Prof. Kerry Emanuel of MIT in 2005 indicated that warming should be associated with an increase in overall storm intensity. (An animated graph of Atlantic sea surface temperature and hurricane power intensity has been updated from the original paper with 2 more years of data.)

A new paper published last week has generated considerable controversy by suggesting that warming will lead to increased wind shear over the Atlantic which could contribute to decreased tropical storm activity. A post last Wednesday by Chris Landsea of NOAA's National Hurricane Center at the Prometheus science policy blog produced some interesting comments, and the subject was discussed at RealClimate as well. A play-by-play description of the festivities, including some of the choicest name-calling, can be found at the bunny hutch of the pseudonymous Prof. Rabett.
Posted by Steve Scolnik at 5:10 PM No comments: