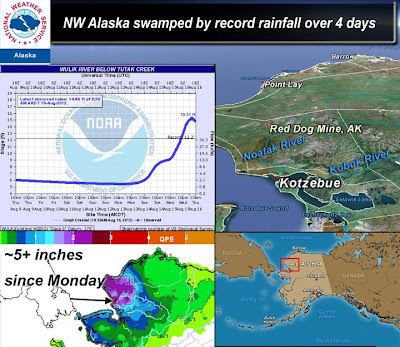 Posted by Steve Scolnik at 6:56 PM No comments: 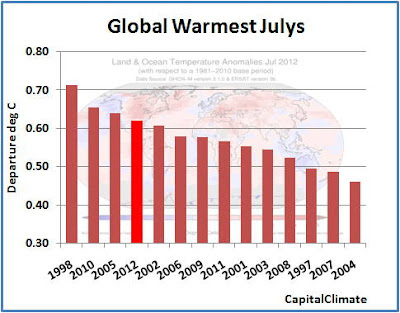 Highlights from the NCDC:

The globally-averaged land surface temperature for July 2012 was the third warmest July on record, at 0.92°C (1.66°F) above average.

The Northern Hemisphere land surface temperature for July 2012 was the all-time warmest July on record, at 1.19°C (2.14°F) above average.

The combined global land and ocean average surface temperature for January–July 2012 was the 10th warmest such period on record, at 0.53°C (0.95°F) above the 20th century average.

Posted by Steve Scolnik at 1:52 PM No comments:

Self-designated climate expert Richard Muller appeared on the Diane Rehm show on NPR this morning, along with Juliet Eilperin, a shark book author and occasional environment reporter, and Michael MacCracken, chief scientist at the Climate Institute. Although apparently now convinced of 1980s-level climate science, Muller kept spinning the story as a political issue, almost immediately casting it as a Republican vs. Democrat story (i.e., Republicans were "more aware" of the "terrible quality" of the temperature record).

Among the voluminous Muller whoppers:
- Katrina is irrelevant because it was only a Category 3 at New Orleans
- Precipitation extremes are not significant
- Emissions are China's fault
- Decades of previous inaction are not a problem

Audio at the link, if you can stand it:
New Consensus On Climate Change 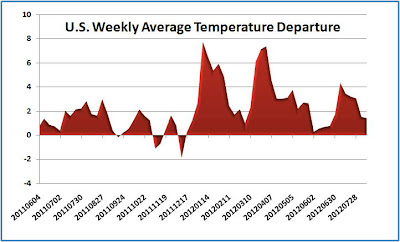 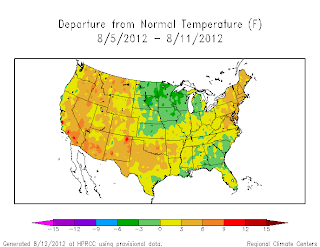 August 14 Update: The preliminary National Climatic Data Center analysis shows that the U.S. national average temperature was 1.9° above normal in the past week, with the month-to-date average 1.7° above. For the first time in 10 weeks, the East North-Central region was below average at -1.0°.

Original post:
CapitalClimate analysis of preliminary reports from 215 National Weather Service stations across the 48 contiguous states shows that the unadjusted U.S. national average temperature was 1.4° above climatological normal for the week ending yesterday, August 11. Thanks to some cooling in the Midwest and Southeast, this was down somewhat from the record 3.3° for the month of July. However, the past 2 weeks are the 34th and 35th consecutive weeks of above-average temperatures. With August now one-third over, every single week so far in 2012 has been warmer than climatology. The last cool week ended 8 months ago, on December 10.

Of the 215 locations, 63% were above average, vs. 88% the previous week. All of the 9 National Climatic Data Center climate regions have been warmer than average for each of the 5 weeks through August 4.