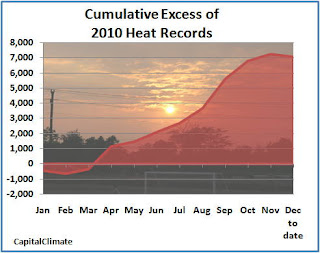 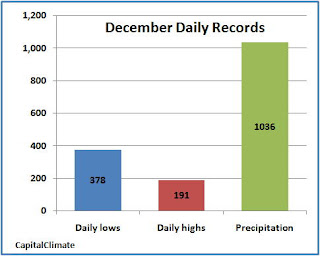 It was noted here recently that heat records have far exceeded cold records in the U.S. for the last 9 consecutive months. Nevertheless, the recent outbreak of Arctic air as far south as the Gulf Coast and Florida has inspired the Ice Agers to Twitch far and wide, "Hundreds of new cold and snow records set in the USA." The heavy snowfall in Minneapolis even led to the collapse of the inflatable roof of the Metrodom [sic].

Is the oft-proclaimed, but never observed, New Ice Age upon us? Well, not quite yet. With the month of December almost half over, the new daily low temperature records have exceeded the new daily highs by a margin of 378 to 191. For the year to date, however, the heat records still exceed the cold records by 7068. At the current rate, the cumulative cold records will catch up to the hot ones in about 491 days, or a little over 16 months.

As usual, focusing on the short term obscures the true picture. Leaving aside the fact that the area of the entire U.S. is less than 2% of the area of the Earth, the latest available December month-to-date average temperature (through the 12th) shows that more of the country is near to above normal than below. Furthermore, the areas with the heaviest snow are not particularly cold.