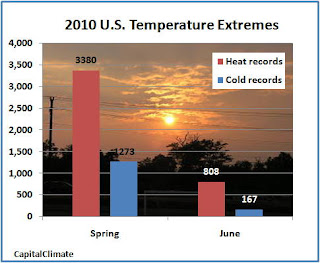 July 3 Update: The June heat records keep rolling in, from the Mid Atlantic through the Southeast:

South Carolina
June 2010 was the warmest on record at the Charleston airport (83.4°) and the third warmest in downtown Charleston (83.3°). At the airport, 25 days were at 90° or above, including the last 21 consecutive days of the month. Downtown temperatures were 90° or above on 14 days. Airport observations date back to 1938, and downtown records began in 1870.

The Greenville-Spartanburg average of 80.8° in June was the second warmest on record, behind the 82.2° in 1952. This was only the 4th time since records began in 1893 that temperatures there have averaged 80° or higher in June.

Georgia
June temperatures were the second warmest on record at Savannah. The average of 83.6° was tied with June 1952. There were 25 days with temperatures of 90° or above, including 20 consecutive days from the 10th through the 29th. Savannah records began in 1870.

Florida
The June average temperature of 83.8° at Tallahassee was tied with 1952 as the second warmest June on record. There were 25 days with temperatures of 90° or above.

Key West's average temperature of 85.9° broke the old June record of 85.4° set in 1886. There were 14 daily records broken during the month; 13 of those were record warm minimum temperatures. Key West records began in 1871.

Original post:
Washington, DC was far from alone in experiencing record heat for the month of June.

Virginia
In Richmond, the monthly average of 81.1° was 7.6° above normal and nearly 2° above the old record of 79.2° in 1943. The difference between the new and old records is greater than the difference between the old record and the current 11th warmest June. This June was warm enough to be tied with the 10th warmest July. The last 3 consecutive months have now been in the top 10: April (4th warmest), May (8th warmest), and June (top warmest). The spring average (March/April/May) was also the warmest on record. Richmond temperature records began in 1880.

Florida
The National Weather Service reports that 3 out of the 4 primary climate reporting stations in south Florida (Miami, Ft. Lauderdale, and Naples) had their warmest June on record. In Miami, the average of 85.6° was the warmest for any calendar month in history. The low temperature failed to go below 80° for 13 days in June, breaking the old record of 12 in 1998. The previous month was also the warmest May on record. 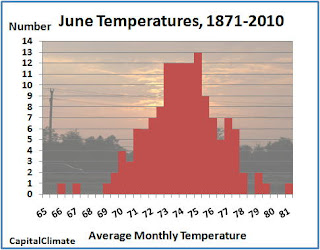 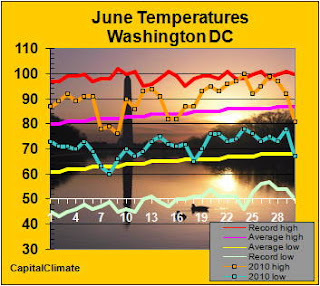 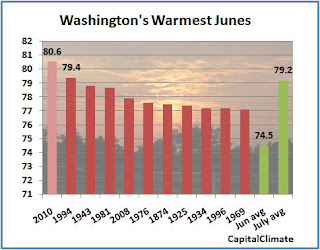