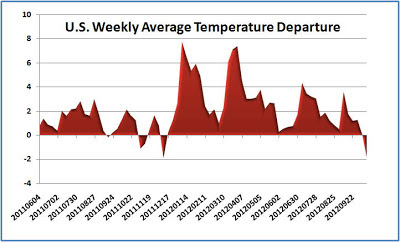 Preliminary data from the National Climatic Data Center (NCDC) show that the temperature for the contiguous 48 states of the U.S. in the week ending October 13 was cooler than average for the first time in 10 months. After 43 consecutive warm weeks, the national average temperature was 1.8° below normal. This also brings the month-to-date temperature for October to -0.9° relative to average. For the week, cool temperatures prevailed in 5 out of 9 climate regions (Northeast, East North-Central, Central, West North-Central, and South). Both the Central and East North-Central were near to more than 5° below average.

CapitalClimate analysis of unadjusted data from 215 National Weather Service stations shows that 83% of locations were cooler than average, while only 13% were warmer.

Posted by Steve Scolnik at 5:45 PM No comments: 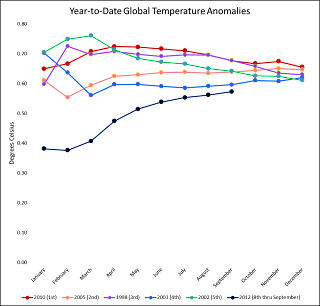 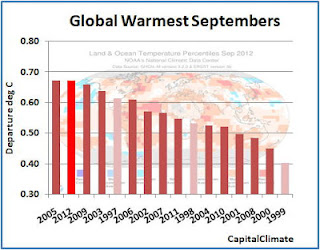 Posted by Steve Scolnik at 5:32 PM No comments: