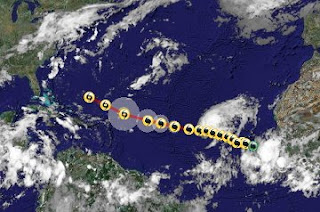 Tropical Storm Bertha is moving more westward than originally forecast and gradually strengthening. Maximum sustained winds are now 50 mph, and little change in strength is expected today, but it is forecast to become a minimal hurricane as it moves north of the Lesser Antilles in a few days.

Tropical Storm Bertha track from IBISEYE.
Posted by Steve Scolnik at 11:50 AM No comments: 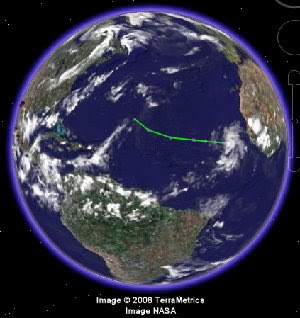 Image from Google Earth
Posted by Steve Scolnik at 4:00 PM No comments:

Here's where we put the "capital" in CapitalClimate. Energy prices have been soaring well enough on their own lately (past $140 a barrel for oil), but what if tropical storm disruptions or an exceptionally cold winter put more upward pressure on prices? Despite all the complaining over heat and humidity around this time of year in the Nation's Capital region, the typical household in the area spends more on heating than cooling. The Big Boys can hedge by trading in the futures markets, but the prices there are heavily influenced by speculation.

Money Magazine's Jason Zweig, appearing recently on the Nightly Business Report, suggested a strategy that could be practical for the individual homeowner. His plan works like this: Take an amount roughly equal to your total seasonal heating bill and use it to buy shares in an exchange-traded fund (ETF) which is based on the cost of your heating fuel. (An ETF is like a mutual fund, but instead of being priced once a day at the close of the market, shares are traded continuously on a stock exchange.)

Expenses involved in this strategy include management fees of about 0.6-0.8% and commissions to buy and sell (now around $10 or less per transaction at many discount brokers). In the event of a gain, profits are subject to taxes at ordinary income rates for shares held less than a year and capital gains rates of 15% or less for longer holding periods. If the value goes down, you can use the money saved on your heating bill to hedge against future price increases. If you sell the shares at a loss, then the loss amount can offset gains from other investments or be deducted from other income up to $3000.

Image: 3-month chart of UNG from BigCharts.com, via Fidelity Investments. Click to enlarge.
Posted by Steve Scolnik at 1:55 PM No comments:

"There Will Be Flood"

Tonight's Daily Show is a rerun of the June 18 episode, including the report, "There Will be Flood: The media attempts to show the Midwest flood's magnitude by breaking out the human dipsticks." The show will be repeated during the day on Tuesday.

Also included is "Wet Hot American Bummer", in which Jason Jones and Wyatt Cenac "report" from Quincy, Illinois.
Posted by Steve Scolnik at 1:00 AM No comments:

Meanwhile, Climate Progress reports that a Georgia judge has applied the Supreme Court ruling for the first time to prevent construction of a coal-fired power plant.
Posted by Steve Scolnik at 10:53 PM No comments:

For those who are bandwidth-challenged (Verizon, can you hear me now?) and for more detail, here is some additional information and analysis of the White House's pathetically juvenile response to the EPA's recommendation on CO2 regulation: For the You-Tubers, Jon Stewart presents the case below.
Posted by Steve Scolnik at 10:32 AM No comments: