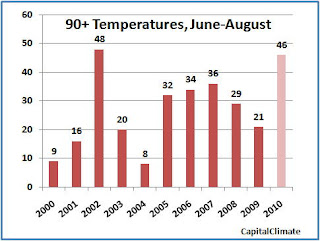 1 AM Update: The temperature is still 85°; the new record high minimum goes into the books.

Midnight Update: The midnight (EDT) temperature is down to only 85°, so the record high minimum will most likely hold.

Original post:
Today's preliminary high/low temperatures of 97°/80° at Washington raise the summer average to date another notch to 81.9°. The August average is now 82.0°, 3.2° above average and the second hottest August in history. There have now been 51 days of 90°+ temperatures this year, 46 of them this summer. The summer total is now within 2 of the amount in 2002 and more than double last year's. The record for a calendar year is 67 in 1980.

The high missed the daily record by 3°, but the low, if it holds through midnight (1 am EDT), will break the old record high minimum of 78°. If it occurs, this will be the 4th daily low of 80° or higher this summer, the first time there have been more than 3 80°+ lows in the same year. In all, there have been only 28 such lows since records began at or near the current location of National Airport in 1930. The highest was 84° on July 16, 1983. If no rain showers lower the temperature, as seems likely from the current regional radar, the record will undoubtedly hold. Interestingly, however, on July 20, 1981, an impressive 0.76" fell within the 2 hours of 7 to 9 pm (EDT), but the low temperature for the day was still 80°. 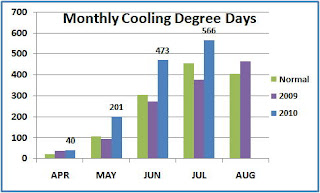 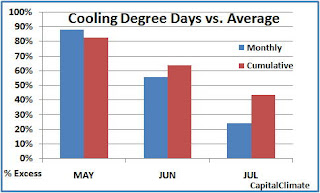 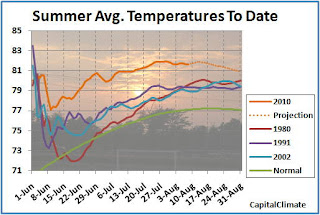 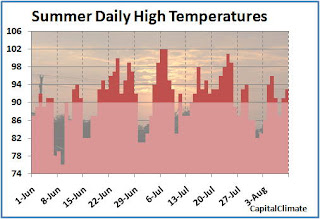