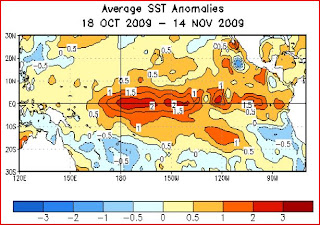 NOAA's Climate Prediction Center winter 2009-10 outlook, updated this morning, continues to expect a pattern strongly affected by El Niño. Like the preliminary outlook issued a month ago, the latest one features warmth from Washington and Oregon southeastward through the Rockies, northern Arizona, and New Mexico and across much of the Midwest to Wisconsin and Michigan. Cool temperatures are predicted from the Gulf Coast through the Southeast to the Mid Atlantic area as far as extreme southern Pennsylvania and New Jersey.

Also consistent with a persistent El Niño is a precipitation pattern with above-average amounts from California through most of Texas, the southern Gulf Coast states, Florida, and the southeastern Atlantic coast.

The main difference from the previous outlook is an increase in the probability for warmer than average temperatures to 50% or above in North and South Dakota, Minnesota, and northernmost Wisconsin and Michigan.

The National Climatic Data Center preliminary analysis for October was posted late Friday. Unlike the cold average for the U.S., the average global temperature for land and ocean combined was 0.57°C (1.03°F) above the 20th century average of 14.0°C (57.1°F). This makes it the sixth warmest in history. The average land temperature alone was also the sixth warmest, while the average ocean temperature was the fifth warmest. For the year to date, the January through October average is tied with 2007 as the fifth warmest. (Note: The preliminary analysis was made before data from Canada were available, so global averages may change slightly.)

Other than the U.S. and northern Europe, nearly all land areas were warmer than average. The warmest regions relative to normal were in the high latitudes of the Northern Hemisphere, particularly Alaska and northern and eastern Russia. In the Southern Hemisphere, New Zealand reported the coldest October in 64 years, with some all-time record low October temperatures. On the other hand, Darwin, Australia had its warmest month since records began in 1941:

The previous record for the month of October and for any month of the year was 34.4°C, most recently in October 2008. This October, the daily maximum temperature during the month reached 35.0°C on 13 days, the highest on record for any month, and there were another 4 days with 34.9°C.

Record warm temperatures have continued into November in Australia, where Adelaide in South Australia has recorded its first ever spring heatwave of 8 consecutive days above 35°C; 5 consecutive days are required for a heatwave, and the previous record was 4 in 1894.

Like a Stopped Clock, WaPo Finally Gets One Right

Despite a sorry history of giving excessive op-ed space to climate "experts" George Will and Bjorn Lomborg, the WaPo finally gets it right for once. In today's Outlook/used-to-be Book World section, Neil Irwin, an economics reporter, gives the authors of Superfreakonomics some of their own medicine (How Freakonomics got super, freaky and scary):

Steven D. Levitt and Stephen J. Dubner are to blame for the global financial crisis.

See, back in 2005, they wrote "Freakonomics," a wildly successful book brimming with interesting stories about why incentives matter and how actions have unintended consequences. Indeed, incentives do matter, and actions (or publications) do have unintended consequences: Their book made economists around the world more inclined to come up with cute little analyses of the business of being a drug dealer or the impact of a first name on a child's success. And that distracted them, so they didn't notice the giant housing and credit bubbles that in hindsight were plain to see. A global collapse ensued.

More seriously, Irwin exposes the book's errors on prostitution and drunk walking before taking on the climate issue:

Both of those problems are mild compared with the ones in the penultimate chapter, in which the authors bring their oh-so-clever approach to the climate debate. The standard strategy for preventing potentially catastrophic global warming, one advanced by an overwhelming consensus of climate scientists and environmental economists, is to put in place policies to reduce the amount of carbon dioxide humankind emits. That's apparently too conventional for Levitt and Dubner, who spend the vast majority of their chapter (with time taken out for potshots at Al Gore) examining the work of scientist/entrepreneur Nathan Myhrvhold's crew, a group that is exploring the idea of pumping sulfur into the upper atmosphere and other neat tricks that just may be cheaper, easier ways to combat global warming.

It would be great if one of those schemes turns out to work. Fantastic, even. But Levitt and Dubner seem to simply presume that because one of them might work, Gore et al. are foolish to push to reduce emissions. It is like a family declining to save for college because their 10-year-old Little Leaguer with a decent arm may end up getting a full baseball scholarship.

This review follows closely after Elizabeth Kolbert's demolition of the book in the current New Yorker. Kolbert takes off from the Freakos' analysis of the 19th century New York horse manure crisis to conclude:

To be skeptical of climate models and credulous about things like carbon-eating trees and cloudmaking machinery and hoses that shoot sulfur into the sky is to replace a faith in science with a belief in science fiction. This is the turn that “SuperFreakonomics” takes, even as its authors repeatedly extoll their hard-headedness. All of which goes to show that, while some forms of horseshit are no longer a problem, others will always be with us.

Kolbert held an online discussion of the subject on November 11.
Posted by Steve Scolnik at 2:04 PM No comments: