5 pm Update: Daily/monthly totals through 5:00: BWI is now above average for the year by slighly over half an inch.

PM Update: (Added the longer-term percentage of average precipitation analyses which were not available this morning.)
Although they don't include the locally heavy downpours since 8 am this morning, the water-year (since Oct. 1) and 90-day maps below show widespread areas from northern Virginia through Maryland (including the District of Columbia) at 90% or less of average precipitation amounts. So, although gardeners and farmers may be complaining about an excess of rainfall in the shorter term, longer term hydrological issues may be a concern if the current wet period fails to continue. 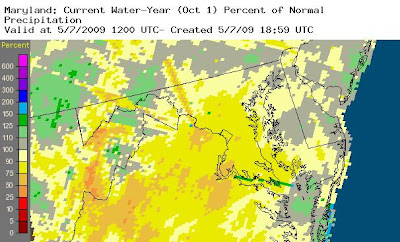 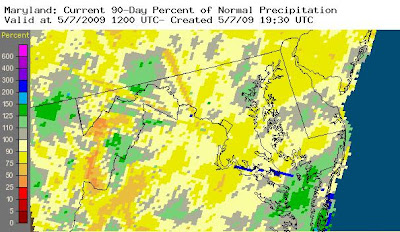 Images (click to enlarge): Water-year (since Oct.1) and 90-day percentage of average precipitation ending 8 am this morning from National Weather Service

Note from Baghdad-on-the Potomac: This post has been delayed by an hour thanks to repeated drops of the Comcast Internet connection. The Verizon land line backup went out of service on May 1 and is expected to require 18 days to repair. 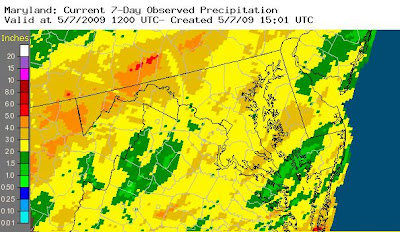 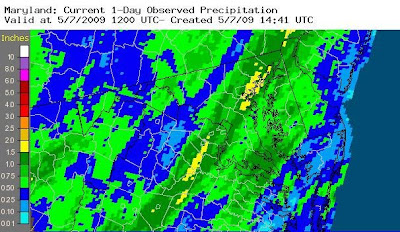 Images (click to enlarge): Weekly and 24-hour precipitation ending 8 am this morning from National Weather Service

The latest U.S. Drought Monitor report, released this morning by the USDA and NOAA, shows that continuing rainfall in the past week has erased the minimal drought levels in most of the Mid Atlantic area. Maryland and Delaware have been completely removed from the Abnormally Dry category, and Virginia has been reduced from 85% to 53%. To the north, dry conditions are continuing in Pennsylvania, but its Abnormally Dry area has been reduced from 91% to 71%.

In the Washington DC area, above-average spring precipitation has nearly wiped out the previous year-to-date deficit. At Washington National, just under an inch of rain yesterday brought the May total to almost 400% of the average to date. This amount was further supplemented by additional heavy showers overnight. Amounts were even higher in the Baltimore metro area, where many locations received up to 2" in the 24 hours ending at 8 am this morning.

Through midnight, year-to-date precipitation totals and departures from average were:
Posted by Steve Scolnik at 10:55 AM No comments: 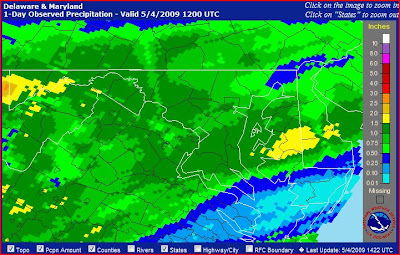 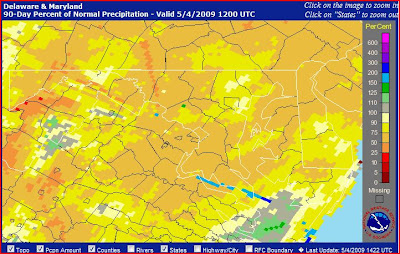 PM Update: As of 5 pm, additional rain during the day has further pushed down the deficits to as low as 10% for the year. Year-to-date totals and departures from average are now:
Original Post:
Following extremely dry conditions for the first quarter of 2009, a wet April has led into a soggy May in the Mid Atlantic area. Through 8 am this morning, 24-hour precipitation over 1" was widespread in the northern Virginia/DC/Maryland region. Daily totals in the immediate vicinity of Washington, DC were: These amounts, and additional rainfall during the day, will continue to erode the lingering deficits. As of midnight, the year-to-date departures from average were:
Posted by Steve Scolnik at 10:37 AM No comments: