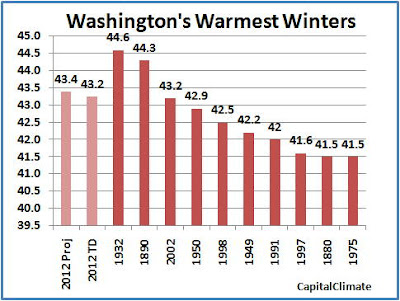 PM Update, February 24: Last night's area forecast discussion said: So, right on schedule, the 24-hour forecast of 75° was busted by 18° in the wrong direction with a high of 57°. Nevertheless, the winter average temperature to date remains tied for 3rd warmest. Although it will be colder over the weekend, temperatures at or near 60° by Wednesday should be enough to clinch undisputed possession of 3rd place. [Chart updated above.] 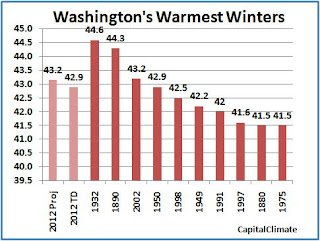 PM Update, February 20: Today's high and low, if it holds through midnight, have already exceeded Sunday's forecast by 2° each. Along with upwardly revised forecasts for the rest of the week (including 68° on Thursday), the projected winter average is now slightly edging out 2002 for sole possession of 3rd place.

Original post:
As noted earlier, Washington has been having an exceptionally warm winter. Temperatures in the past week have confirmed that trend, consistently outperforming even above-average forecasts. This excess culminated on Saturday, when the high of 59°, exceeded the extended forecast by 9°. Although today's high of 45° was well below Monday's National Weather Service forecast of 51°, it was also well above the forecast of upper 30s made less than 24 hours in advance. Altogether, the week's daily highs averaged 3.3° above the temperatures forecast last Monday.

The winter average temperature to date now stands at 42.9°, tied with 1950 for 4th warmest in Washington climate history. Projecting forward using the forecast for the next week, the temperature will have to average just 3° above normal for the last 3 days of the month in order for the winter to tie with 2002 for 3rd place. Regardless of the exact final result, it's likely that 2 of the 4 warmest Washington winters will have occurred in the last 11 years.

Image (click to enlarge): Washington's 10 warmest winters vs. 2011-12 average to date and projected through end of February, CapitalClimate chart from National Weather Service data
Posted by Steve Scolnik at 6:30 PM No comments: