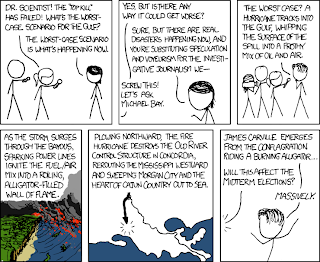 Posted by Steve Scolnik at 12:12 AM No comments:

A study released today by the National Center for Atmospheric Research (NCAR) shows that oil spreading from the massive BP gusher in the Gulf of Mexico is likely to move around Florida, along the southeast U.S. coast, and into the western Atlantic. The computer modeling is not a specific forecast, but it shows the likely flow based on average ocean currents in the region. The 6 simulations which were run provide an "envelope of possible scenarios for the oil dispersal." One of these is shown below:

This animation shows one scenario of how oil released at the location of the Deepwater Horizon disaster on April 20 in the Gulf of Mexico may move in the upper 65 feet of the ocean. This is not a forecast, but rather, it illustrates a likely dispersal pathway of the oil for roughly four months following the spill. It assumes oil spilling continuously from April 20 to June 20. The colors represent a dilution factor ranging from red (most concentrated) to green (most diluted). The dilution factor does not attempt to estimate the actual barrels of oil at any spot; rather, it depicts how much of the total oil from the source that will be carried elsewhere by ocean currents. For example, areas showing a dilution factor of 0.01 would have one-hundredth the concentration of oil present at the spill site.
The animation is based on a computer model simulation, using a virtual dye, that assumes weather and current conditions similar to those that occur in a typical year. It is one of a set of six scenarios released today that simulate possible pathways the oil might take under a variety of oceanic conditions. Each of the six scenarios shows the same overall movement of oil through the Gulf to the Atlantic and up the East Coast. However, the timing and fine-scale details differ, depending on the details of the ocean currents in the Gulf. The full set of six simulations can be found here. (Visualization by Tim Scheitlin and Rick Brownrigg, NCAR; based on model simulations.)

Posted by Steve Scolnik at 2:00 PM No comments: